Smash burgers, freak shakes and Wagyu steaks… Just 10-15 years ago, these words would have been meaningless to most people. Yet, with the passage of time and progression of social media, there are now few people who are NOT acquainted with these words.

Not too long ago, eating takeout food or dining at a restaurant was a rare treat, with even the wealthy not indulging in such a luxury more than once a week. However, it is now common for even middle-class households to buy food multiple times a week. The question we must nevertheless ask ourselves is, “At what cost?”

The truth of the matter is that we no longer consume food – rather, many of us are ‘consumed’ by food. Via Facebook and Instagram, we are, on a daily basis, exposed to adverts and reviews of the latest eating establishments and the newest gastronomic innovations. Pop-ups, sit downs and takeaways – they all market their businesses, on their own social media pages and via ‘food bloggers’, trying to attract as much interest and business as they can. For this purpose, a raving review and flattering photo of the food goes a long way – to stimulating the salivary glands and making the viewer’s mouths pool with drool in hungry anticipation.

It is thus not uncommon to find people now spending time carefully planning their next culinary excursion – “Where will we go to next? What will we try next? There’s a new place, or new dish, that everyone’s trying – we can’t get left behind!”

The plain truth is that many of us have become obsessed with food, whereas this obsession with food is in complete contrast with the sunnah spirit. Rasulullah (sallallahu ‘alaihi wasallam) taught us that the worst vessel that a person can fill is his belly. If any person is intent on eating more than is absolutely necessary, then he may fill one third of his belly with food and one third with water, while leaving the last third for air. (Sunan Tirmizi #2380)

If we ponder over this beautiful prophetic teaching, we will realize that through exercising control over one’s appetite, one not only enjoys spiritual benefits, but one will also lead a healthy life, free from obesity, cholesterol, diabetes, and other diet-related diseases. However, more than the health concern – the greatest concern of a believer is that he should be living like a true Muslim, not like a disbeliever.

In this regard, Rasulullah (sallallahu ‘alaihi wasallam) mentioned that a believer eats in one intestine, while a disbeliever eats in seven intestines. (Saheeh Bukhaari #5393) The commentators explain that the literal meaning of this hadeeth is not intended, as believers and disbelievers have the same anatomy and intestines. Rather, the meaning is that a believer is not greedy and obsessed with food. Hence, he is content to eat that which would fill just one intestine. However, the disbeliever is greedy and obsessed with food, and hence he lives to indulge in gluttony, enjoying everything that he can and filling his stomach to its maximum capacity.

The current eating-out trend and obsession for food that are gripping us, compelling us to tour the restaurant and takeout scene, always buy the latest imported sweets, chocolates and cereals, and punctually put in an appearance at every food-festival and pop-up, is without a doubt, wasteful and extravagant. Some people spend upwards of R600 for a single steak, and some families easily spend R1000 or more a week on bought food! When we stand before Allah Ta‘ala on the Day of Qiyaamah, how will we justify this, especially when there are people, practically on our doorstep, suffering from starvation? How can we turn a blind eye and over-indulge when Allah Ta‘ala has declared that He does not love those who are wasteful?

One of the greatest harms of this excessive eating-out lifestyle is the aspect of ADDICTION. We become so habituated to consuming this type of food and leading this luxurious lifestyle that in many cases, ‘home food’ is absolutely unappealing, is viewed with disappointment and is received with a lack of appetite.

Furthermore, since public perception is regarded as so important today, and countless people post pictures of the meals they enjoy, many of us also feel a pressure to maintain appearances and keep up with the Jones by eating out and posting the evidence online – even though it is a drain on our finances. What will happen to us if the day comes when we can no longer afford this lifestyle? What will happen to our children if they cannot afford this type of lifestyle one day? Obviously, it will cause severe depression, affect our lives and may even create problems in our marriage.

Maintaining an image is an urge that can drive a person to odd extremes. Hence, at times, a Muslim, against his better judgement, will even resort to eating in a non-Muslim establishment, despite the abundance of halaal establishments in the vicinity! He may attempt to justify his behaviour by stating that it is ‘halaal friendly’, or that he eats non-meat items, even though he is surrounded by wine and pork. The reality is that he is either obsessed with keeping up with the Jones or with food, and since he has already exhausted his choices of halaal establishments, he now turns to haraam ones.

In essence, there is no harm in OCCASIONALLY enjoying such luxuries and treats. However, many of us have crossed the line and have now become completely obsessed with food, spending disproportionate amounts of time, money and energy on food (for an eye-opening incident in this regard, click here). Imagine if we spent half that amount on food, and used the other half to feed the poor and destitute. Imagine the du‘aas they would give us, the rewards we would accrue in the Hereafter and the difference we would make to society! If we do not have the heart to spend on others, then there are surely more beneficial ways for us to spend our money, such as saving for a ‘rainy day’, etc.

Instead of living to eat, let us eat to live.

May Allah Ta‘ala bless us all with the wealth of contentment and the sunnah of simplicity – aameen. 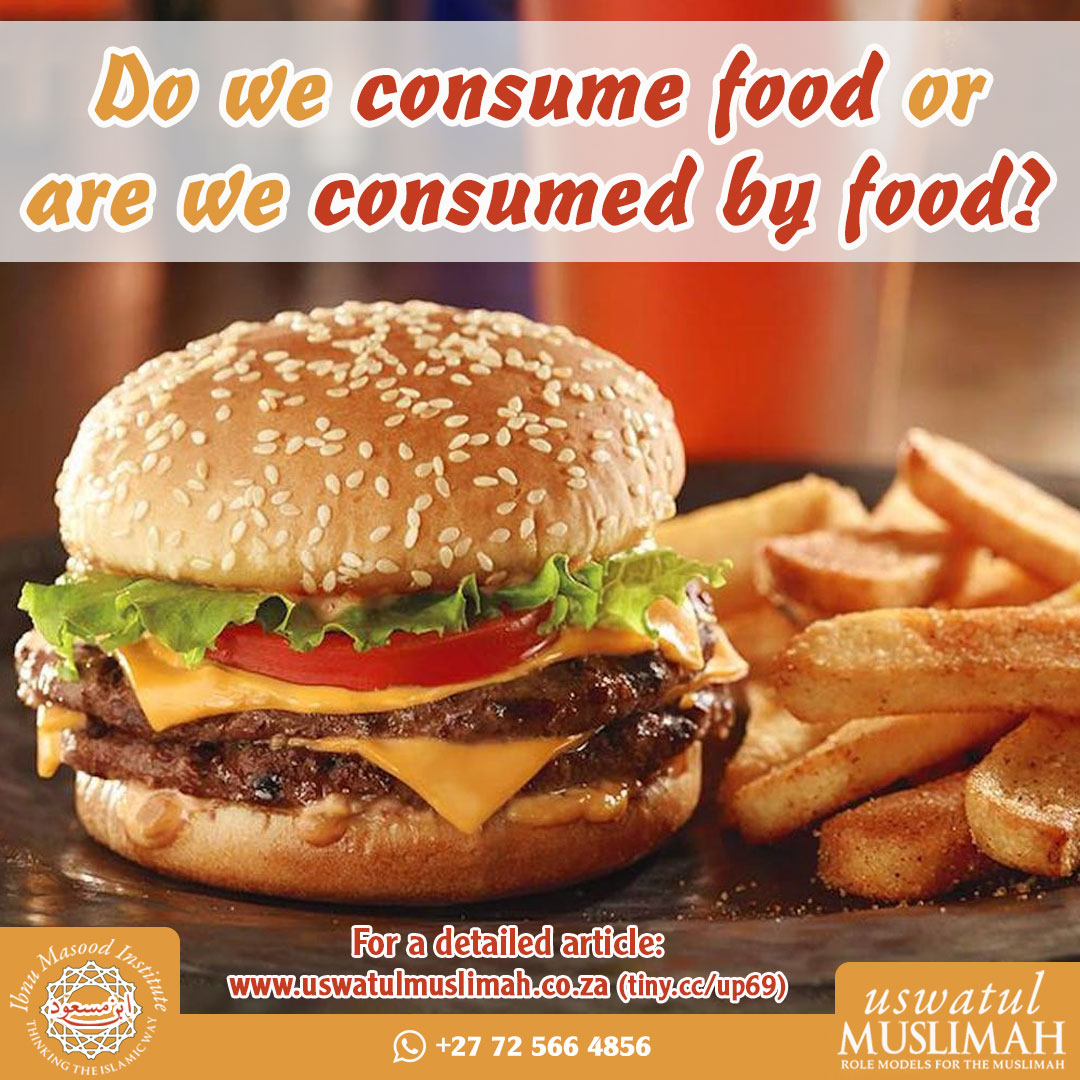 Share
Previous Is a man allowed to wear a silver ring that has a diamond stone on it?
Next Blasphemy of the Prophet ﷺ and Islam