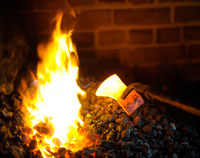 Ibnul Jowzi (rahimahullah) narrates that a pious person once mentioned:

I once entered Egypt where I found a blacksmith who would extract iron from his furnace using nothing but his bare hands! He would then place the iron on his anvil and turn it with his hands without apparently experiencing any pain whatsoever.

On witnessing this extraordinary spectacle, I thought to myself, “This must most definitely be a very pious man if the fire does not harm him!” With this in mind, I drew close to him and greeted him with salaam to which he replied. I thereafter addressed him in the following words, “O my master! I beseech you in the name of that Being who favoured you with this miracle to please make du‘aa for me!” On hearing my request, the blacksmith began to cry and exclaimed, “My brother! By Allah! I am not the pious person that you think me to be!” To this exclamation, I replied, “O my brother! This miracle which I witnessed from you is something which only the pious people are able to carry out.” The blacksmith answered, “There is a strange incident behind the miracle you speak of.” At my request, the blacksmith thereafter recounted the following incident:

I was once sitting in this business of mine, in a state of intense preoccupation, when I suddenly realized that there was a woman before me. On glancing at her, I beheld a face which possessed beauty the like of which I had never seen before. The woman addressed me and pleaded saying, “O my brother! Do you have anything to give us for the sake of Allah Ta‘ala?” I was, by this point, captivated by her sight and infatuated by her beauty. I therefore replied, “Why don’t you accompany me to my home where I will give you something that will see to your needs?” On hearing my suggestion, she looked at me in silence for some time and eventually turned and departed from my business. After some time had passed, however, she returned and submitted, “Dire necessity has forced me to accept your offer.” I therefore locked my business and proceeded home with her.

When we reached my residence, she begged me saying, “I have children whom I have left in extreme starvation. Please give me something that I can take to them! I will return to you thereafter.” After making her promise and vow that she would return, I gave her some dirhams and watched as she left to see to her children. When she returned, I ushered her into my home and turned to lock the door. “Why are you locking the door?” she asked. “I fear the people.” I replied. “And why do you not fear the Lord of all the people?” she enquired. “He is Forgiving and Merciful.” I retorted. I then advanced towards her and found that tears were streaming down her cheeks in torrents and she was trembling, just as palm leaves tremble beneath the force of a gale. “Why are you trembling and crying?” I asked. “Out of the fear of Allah Ta‘ala.” she answered.

The woman then turned to me and pleaded saying, “If you leave me for the sake of Allah Ta‘ala, I will stand guarantee that Allah Ta‘ala will neither punish you with fire in this world nor in the next.” When I heard her say this, I was shaken and instantly stood and gave her all that I owned saying, “I have left you out of the fear of Allah Ta‘ala!”

A while after she had left, I fell asleep and had a dream in which I saw a woman wearing a crown of red rubies who had the most beautiful face that I had ever seen. She said to me, “May Allah Ta‘ala reward you well on our behalf.” Who are you?” I asked. “I am the mother of the girl whom you left out of the fear of Allah Ta‘ala. May Alah Ta‘ala never punish you with fire, neither in this world nor the next.” I next said to her, “Please tell me who she is and which family she is from.” To this the woman replied, “She is from the family of Rasulullah (sallallahu ‘alaihi wasallam).” It was then that I remembered the verse of the Qur’aan in which Allah Ta‘ala mentions: “Allah only intends to keep (all sorts of) filth away from you, O members of the family (of the Prophet), and to make you pure through a perfect purification.”

2. If we introduce a person to an evil habit or sin, we will have a share of the burden to bear every time he commits it. On the other hand, if we are instrumental in assisting someone to abstain from sin or change their lives for the better, we will continue to receive reward so long as that person is benefiting from our advice and encouragement.

3. We do not know which action or which person’s du‘aa will be the means of drawing the special mercy of Allah Ta‘ala. As such, we should never consider any good action to be insignificant or risk losing the du‘aa of any person.

4. A person who wishes to commit a sin should fear the punishment of Allah Ta‘ala as His forgiveness is for those who sincerely repent and wish to change their lives.

5. A believer should meditate, for a few minutes daily, over the reality that Allah Ta‘ala is watching him at all times.

Share
Previous Identifying with Idols
Next Fourteen of the Best – Badr

The Prophet (Sallallaahu Alaihi Wasalaam) said: “The best of the Muslims is he from whose …