How Many ‘Likes’ are Enough? 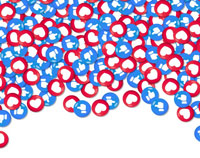 Have you ever wondered what drives a person to take his own life by leaping off a bridge, slashing his wrists, intentionally overdosing on medication or holding a gun to his head and pulling the trigger? The answer – in most cases, he is driven to the brink of despair by the overwhelming feeling that nobody ‘likes’ him or cares about him. Hence, by setting out to take his life, he is actually pleading for people to give him the attention that he so desperately craves.

In essence, it all boils down to people’s need to be liked and feel accepted. For some people, the need to be liked and feel accepted is so overwhelming that they allow it to dominate their entire existence. The food they eat, the clothing they wear, the partner they marry – almost every choice they make in life is based on how it will resonate with people and how many ‘likes’ it will receive.

The reality of the matter, however, is that these ‘likes’ do not mean that people actually like us. Rather, they merely like the image and lifestyle which we portray to them. It is for this reason that if one has to post something that clashes with the popularist culture, condemnation will be swift and merciless. Those very followers who once fanatically followed us and liked our every post will now turn against us, troll us, label us and ‘lynch’ us online. Such is the fickleness of such followers and such is the fallacy of their likes and loyalty which shifts as rapidly as the wind…

The solution, to the human need for acceptance and to be liked, is to change our focus. Instead of anxiously waiting for random people to approve of us and like us, we need to realize that we only need ONE like to be happy and feel accepted – the ‘like’ of Allah Ta‘ala. Instead of ‘bending over backwards’ to impress people, we must rather make every effort to please Allah Ta‘ala and secure His ‘like’, for when Allah Ta‘ala blesses a person with His divine ‘like’ and acceptance, it fills the heart with such happiness that even if the entire world rejects you, it will be of little consequence to you and will not greatly affect you.

Nabi Nooh (‘alaihis salaam) had very few followers as the majority of his people rejected him and did not ‘like’ him (as they did not wish to abandon their evil and sin). The same applies to Nabi Loot (‘alaihis salaam) and many other Ambiyaa (‘alaihimus salaam). Even our beloved Rasulullah (sallallahu ‘alaihi wasallam) was boycotted and ostracized by the Quraish in the early days of Islam. However, despite the lack of popularity and ‘likes’ among the masses, they knew, without a shadow of doubt, that as long as they had the ‘like’ of Allah Ta‘ala, they had nothing to worry about.

People, by nature, have the need to feel accepted, loved and wanted. It is this same need which drives certain people to post details of their lives on social media, as they hope to attract admiration and love. Hence, it is no wonder that for such people, it is all about acquiring as many ‘likes’ as you can, as a ‘like’ is taken as a sign of acceptance and love.

Similarly, many people fear losing love and acceptance, and so always strive to conform to the expectations of others – even if it be at the expense of their own happiness, and even worse… their Deen. One such example, which although often quoted, remains as relevant as ever, is that of attending mixed functions (where strange men and women intermingle or the laws of hijaab and niqaab are not upheld) in order to remain ‘good’ with everyone and avoid falling from favour.

In the hadeeth above, Rasulullah (sallallahu ‘alaihi wasallam) has explained that if a person wants acceptance and love – he will have to acquire it from above. One will have to strive to earn the love and acceptance of Allah Ta‘ala by always obeying Him and making an effort to do that which is pleasing to Him. Through this effort, one will acquire the love of Allah Ta‘ala, after which Allah Ta‘ala will cause the creation to love him as well.

It is for this reason that we find people from all walks of life flocking to the pious servants of Allah Ta‘ala, as bees flock to honey, as the love for the servants has been instilled into their hearts from above. Conversely, if we displease Allah Ta‘ala, then He will cause the creation to dislike us and be displeased with us. (Saheeh Muslim #6705)

May Allah Ta‘ala bless us all with His love and acceptance, aameen.

Remember, we don’t need a thousand, a hundred, or even ten ‘likes’ to be happy. All we need is one like – the ‘like’ of Allah Ta‘ala which is earned through pleasing Him.