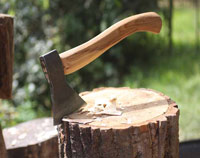 In the era of Sultaan Mahmood, Sawmnaat was the name of a large city and also the name of an idol which was housed within its temple. Sawmnaat, the idol, was so revered by the disbelievers of India that it had a Ka’bah-like status in their eyes. On the occasions of a solar or lunar eclipse, up to 230 000 people would travel to Sawmnaat from distant lands in order to seek its “blessing” and beg favors of it. The disbelieving king of India would personally see to the upkeep of Sawmnaat and had dedicated the income of approximately 2000 towns to its upkeep. 2000 priests would remain in the temple at all times to worship Sawmnaat and would wash him with water of the Ganges River every night (the water would be brought from the river which was just less than 2000km away). The priests had hung a chain of solid gold which weighed approximately 170kg from one end of the temple to the next. Scattered across the length of this chain were small bells which would be rung to indicate that it was time to worship Sawmnaat. 500 singing women and 300 men would remain in the temple to serve Sawmnaat and an additional 300 barbers were kept available to shave the heads and faces of the priests. The king had even dedicated his daughters to the service of Sawmnaat. They lived lives of celibacy in the temple and passed their days serving the idol.

In the year 415 A.H., Sultaan Mahmood was informed that some people of India held the corrupt belief that after a person passes away his soul leaves his body and travels to the idol, Sawmnaat. The idol, Sawmnaat, then judges the person’s actions and gives him a new body to restart life. The type of body given (whether human or animal, and if animal, which animal) depended on how righteous the person was in his lifetime (reincarnation). These people also held the erroneous view that the rising and falling of the ocean tides was actually the ocean worshipping and prostrating to Sawmnaat. Sultaan Mahmood was also told of these people’s claim that all the idols which Sultaan Mahmood had destroyed to date had only been destroyed because Sawmnaat had been displeased with them. Had he been pleased with them, he would have definitely rushed to their aid and destroyed Sultaan Mahmood. According to these people’s belief, Sawmnaat was the chief god and all other idols were subservient to him. When Sultaan Mahmood learnt all this, he immediately resolved to travel to Sawmnaat in order to destroy the idol and bring an end to its worship. With this purpose in mind, he summoned his special army and an additional 30 000 troops and set out for Sawmnaat on the 20th of Sha’baan.

When the army of Sultaan Mahmood eventually arrived at the city of Sawmnaat, the inhabitants climbed the walls and began to shout at the Muslims saying, “Sawmnaat has summoned you here so that he may strike you and kill you all at once!” Sultaan Mahmood engaged them in war and after a few days of intense fighting, Allah Ta‘ala granted victory to the Muslims. After conquering the city, Sultaan Mahmood entered the fort with his ministers and sons. He thoroughly examined every corner of the fort until he found an internal passage which led to the temple. He traversed the length of the passage and on emerging in the temple, found it to be very large. Its vastness could be gauged from the fact that its roof had to be supported by 56 pillars. It was here that the idol, Sawmnaat was housed. The idol itself was also very large. It was approximately 4.5m in height, 2.8m of which were embedded into the ground allowing the remaining 2.7m to tower above the ground. The idol was made of stone.

As Sultaan Mahmood advanced to destroy the infamous idol, Sawmnaat, the idol worshippers came forward and began pleading and begging Sultaan Mahmood to spare their idol. They were so desperate to save it that they even promised Sultaan Mahmood that they would pay an annual tribute of gold to the Muslims if he spared it. Sultaan Mahmood summoned his advisers and asked them what they felt should be done. The advisors unanimously said, “We have already conquered the land. Sparing one idol will not harm us and destroying it will not bring an end to idol worship as they will simply construct another idol. Accept the gold as it will greatly benefit us and will come in use for equipping the army.”

Sayyid Mas‘ood Ghaazi (rahimahullah) also happened to be present. When he heard the suggestion of the advisors, he spoke and said, “To spare the idol is idol worship. Until today, the King was known as a person who destroys idols. After today, he will be called a person who sells idols.” Although this statement of Sayyid Mas‘ood Ghaazi (rahimahullah) struck the heart of Sultaan Mahmood and affected him, he still felt slightly hesitant and was unsure as to what he should do. When Sultaan Mahmood went to sleep that afternoon, he had a dream in which he saw that it was the Day of Qiyaamah and he was on the Plains of Resurrection. An angel was gripping him and dragging him towards Jahannum saying, “This man is an idol seller.” Other angels, however, were insistently saying, “No! He is a destroyer of idols! Take him to Jannah!” Sultaan Mahmood then awoke from the dream.

As soon as he awoke, he wasted not a single moment and gave the command for the idol to be destroyed. As soon as his men demolished the idol, they found to their absolute astonishment that it was actually hollow and filled with precious jewels and gems! Sultaan Mahmood immediately thanked Allah for not only saving him from being an idol seller but also granting the Muslim’s even more wealth than they initially hoped to receive from the idol worshippers to spare their idol.

1. The dream which Sultaan Mahmood saw signified the state of his heart. His heart was being pulled between taking the money (signified by Jahannum) and breaking the idol (signified by Jannah). Although accepting the money was not in reality selling an idol, it was an action which resembled that of idol sellers (as the people would get to keep their idol by paying money). Hence the action which Allah Ta‘ala could not tolerate was Sultaan Mahmood resembling the enemies of Islam. If Sultaan Mahmood’s idol was made of stone, then we, on a daily basis, are challenged with idols of flesh and blood – the idols of Hollywood, the sports world and the fashion industry. Will we choose to break these idols or sell our allegiance to Allah Ta‘ala and follow these idols?

2. Imaan is so valuable that it is impossible to attach a price tag to it. Therefore, never allow yourself to be dazzled and blinded by material wealth for which you will trade in your imaan and compromise your deen.

3. When a person makes a sacrifice for the sake of Allah Ta‘ala, he will be rewarded not only in the Hereafter but even in this world.

4. Allah Ta‘ala has great love for His servants and due to His mercy, He sometimes sends them signs to guide them. These signs should be valued, as ignoring them is to actually turn away and reject the love of Allah Ta‘ala.

Once upon a time, there lived a King who, despite his luxurious lifestyle, was …