The last rebel-held stronghold in northwest Syria has been the target of a vicious assault by the criminal Assad regime. Backed by Russian air power, the Syrian regime began its assault on Tuesday. It has since made significant and rapid advancements toward the Idlib province, ransacking towns and villages on its way.

The latest attempt to reach a ceasefire on 12 January was ignored by Syrian forces. Since Tuesday, over 200 airstrikes have been launched on the rebel-held territory in northwest Syria. The strikes have forced 700,000 previously-displaced civilians to once again attempt to escape the onslaught of the Assad regime.

In one raid alone, 11 civilians are reported to have been killed, as a Russian air strike smashed into a bakery and clinic in the town of Ariha. Rescue workers and rights groups present on the ground have also reported airstrikes targeting dozens of schools, hospitals, and homes.[1] It is now believed that 21 people have been killed in recent days.

The charge on Ariha comes after the campaign earlier this week by the Assad regime to capture the town of Maarat al-Numan – the second largest town in the Idlib province. The town strategically straddles the M5 highway between Damascus and Syria’s second city, Aleppo. It remains vital for transport and trade between the two cities.

The Syrian Observatory for Human Rights (SOHR), based in the UK, reported that the regime’s forces had proceeded to seize a further 25 towns and villages in neighbouring areas.

James Jeffrey, the US Special Representative for Syria, in his address to the media, noted that the recent violence had displaced 700,000 people, noting that the air strikes were ‘mainly against civilians’.[2]

The offensive continues a string of recent assaults and attacks by Assad’s regime in the Idlib Province, with the assistance of Russian air forces. At least 1,500 civilians have been killed in Idlib since the violence intensified last April.[3]

The UN reported on Wednesday that approximately 390,000 people, 80% of them being women and children, had already fled their homes in the Idlib and Aleppo regions since 1 December. A further 400,000 were displaced between April and August.[4]

Turkish President Recep Tayyip Erdogan has said that Turkey may consider launching a military operation against Syria if fighting in Idlib is not ceased. [1]

The regime’s vicious campaign has resulted in dozens of towns being destroyed and left in ruins, including hospitals and schools which have been knocked down, according to UN aid agencies.

Erdogan has said that: “Turkey with complete sincerity wants Syria’s stability and security, and to this end, we will not shy away from doing whatever is necessary, including using military force.” [2]

“Developments in Syria are as important as developments within Turkey’s own borders. We will not remain silent on the situation in Syria and Idlib,”

The last rebel-held stronghold in northwest Syria has been the target of a vicious assault by the criminal Assad regime. Backed by Russian air power, the Syrian regime began its assault on Tuesday. It has since made significant and rapid advancements toward the Idlib province, ransacking towns and villages on its way.

The latest attempt to reach a ceasefire on 12 January was ignored by Syrian forces. Since Tuesday, over 200 airstrikes have been launched on the rebel-held territory in northwest Syria. The strikes have forced 700,000 previously-displaced civilians to once again attempt to escape the onslaught of the Assad regime.

The recent campaign has also sparked increased tensions between Ankara and Moscow, with Erdogan accusing Russia of violating the agreement. Turkey has long been backing the rebel forces in Syria and Russia throwing its weight behind the Assad regime.

The Turkish President offered a forceful rebuke of Russian and Syrian actions. Speaking in Ankara on Friday, Erdogan declared that “we will not refrain from doing what is necessary, including using military force”. He noted that he “will not allow the regime’s cruelty towards its own people, with attacks and causing bloodshed.”

He further added that Turkey “will have no choice but to resort to the same path again if the situation in Idlib is not returned to normal quickly.” Turkey has previously intervened three times to date in cross-border military operations.

Turkey has 12 military posts around Idlib, although the recent violence has seen the regime’s forces surround several of posts, limiting Turkey’s access to them. Erdogan has also accused the Kremlin of violating peace agreements between Turkey, Russia, and Iran. Moscow denied these charges on Friday.

In response to the regime’s assault on Idlib, Turkish-backed rebel forces opened a new front against the regime, targeting regime held positions in Aleppo. The SOHR has reported that the charge, focused mainly on the city of Al-Bab, was carried out by factions loyal to Ankara.[3]

Erdogan’s concern stems from its inability to accommodate a further influx of refugees from Syria. Turkey already hosts over 3.5million Syrian refugees and fears that another wave will damage its internal stability.

Erdogan declared that he: “will not allow the regime to put our country under the constant threat of migrants by tormenting, attacking, and spilling the blood of its own people.”

Still, James Jeffrey has noted that movement of the 700,000 displaced civilians towards the Turkish border, to the west of Idlib, will bring with it a fresh international crisis. Thousands of families are now stationed close to the Turkish border without adequate food, shelter, or medicine in the cold winter months.

The latest casualties and bombardment have resulted in another deadly humanitarian challenge as Syria’s war enters another cold winter season. Syria’s nearly nine-year war was born out of peace protests by Syrian civilians for reforms and changes in the Syrian regime. The latter’s response was one of violence and brutality, which forced the people to take up arms in defence. 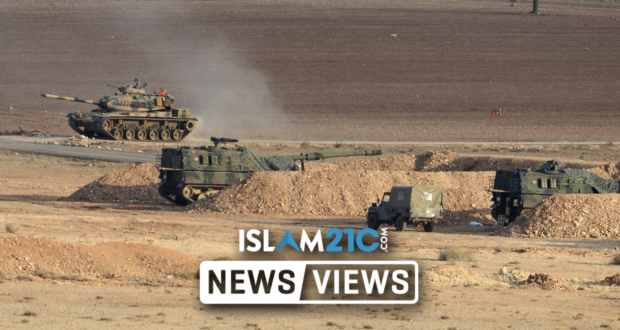 Turkey has hit back and targeted Syrian regime posts after at least five of its soldiers alongside a civilian were killed by regime forces in Idlib. Seven Turkish troops were also wounded in the shelling carried out by the brutal Syrian regime in the battle for the only remaining major opposition-held enclave.[1]

Last week, Turkish President Recep Tayyip Erdogan said that Turkey may consider launching a military operation against Syria if fighting in Idlib is not ceased.[2]

The regime’s vicious campaign has resulted in dozens of towns being destroyed and left in ruins, including hospitals and schools which have been knocked down, according to UN aid agencies.

The Turkish defence military have said that the shelling by the Syrian government was carried out “against our elements sent as reinforcements to prevent clashes in Idlib, despite their positions being coordinated beforehand.”

According to Turkey’s Defence Ministry, Turkish forces were sent as reinforcements. Despite that, they were fired upon even though advance notice of their coordinates was provided. The Assad regime’s main backer has maintained that the Turkish soldiers were shot overnight as a result of a lack of information.

These developments are very likely to further increase tensions between the Syrian regime and Turkey. Direct incidents and clashes like these have been very rare. These recent developments could also result in further friction between the two neighbouring countries.

“Those who test Turkey’s determination with such vile attacks will understand their mistake.” He further added that Moscow was told that Ankara would not stand for any situation “where we are prevented” from responding to Syrian assaults.

“It is not possible for us to remain silent when our soldiers are being martyred.”

Erdogan said, “We made it clear that we are targeting the Syrian regime’s forces simply because it was them who attacked our Turkish soldiers.” The President further added “we cannot sit on our hands. In response, we will hold to account all those responsible for the attack on the Turkish soldiers.”[3]

Idlib is situated in northwest Syria on the border with Turkey. The United Nations (UN) have estimated that 3 million people live in Idlib today, in contrast to the 1.5 million prior to the conflict. The population rise in Idlib is due to many people fleeing their homes, being displaced from other parts of Syria due to earlier periods of violence. Over half the population of Idlib are women and children.[4]

In 2017, both Russia and Turkey came to a decision that both sides will patrol the area (Idlib) to prevent the clashes between the Syrian government and the opposition. As a result, both countries signed a ‘de-escalation’ deal on Idlib, which came into effect the following year of 2018.[5] However, Turkey, who have twelve military observation posts in the besieged area, accuse Russia of violating the de-escalation agreement they had previously signed. Moscow has denied this accusation. This inevitably means the situation in Idlib is in turn raising tensions between Turkey and Russia.

Share
Previous Ummi! ( My Beloved Mother )
Next Being Positive

The REAL Christmas Story: How a Prophet was turned into a god

On December 25th, most Christians around the world will be celebrating Christmas, a day that …