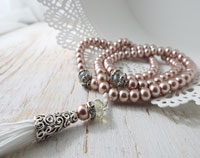 How many people are there who after seeing the above advertisement, will be able to resist the temptation of embarking on a shopping spree? Even if a person does not really need to buy anything, he will still visit the store to window shop, justifying his action by saying, “Perhaps I will find something on sale that I don’t need now but may possibly need in the future. By buying it now, I will save on the price that I would have paid later on when I needed the item.” Further, if we learn of a sale that we missed, or if the sale item that we wanted is sold out, we feel disappointed and feel that we missed out.

While many people have this attitude and mindset of progressing and constantly benefiting, the reality is that we tend to adopt this mindset only in avenues related to our material benefit, not in avenues of Deeni benefit.

In reply, Rasulullah (sallallahu ‘alaihi wasallam) said, “Shall I not teach you something through which you will catch up with those who have surpassed you and you will surpass those who are behind you, and nobody will be more virtuous than you besides the person who does as you do (i.e. he also carries out this action)?” When the Sahaabah (radhiyallahu ‘anhum) replied in the affirmative, expressing their eagerness to learn this action, Rasulullah (sallallahu ‘alaihi wasallam) taught them Tasbeeh Faatimi and instructed them to recite it after every salaah. (Saheeh Muslim #595)

This action is such that it has no cost and requires very little time and effort. Yet, its rewards are such that the person who adheres to this action will surpass all others, unless they carry out this action as well. Why should we be left out?

Let us adopt the mindset of improving our Deen and start by striving to bring the Tasbeeh Faatimi alive. The value of the few moments that it will take us to recite this Tasbeeh will only be realized on the Day of Qiyaamah, when we see how Allah Ta‘ala has allowed us to progress and surpass those who did not recite this Tasbeeh after every salaah.

The Importance of Sadaqatul Fitr

by Shaykh Maulana Yunus Patel (rahmatullah alayh) Alhamdulillah, we find that with the commencement of …

We praise Allah for having blessed us with Ramadhan, may Allah’s peace and blessings be upon Muhammad, …