Home | *Blog | The Concept of Consequence

The Concept of Consequence 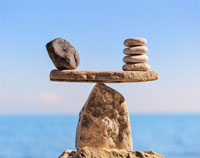 If every person in this world was free to do exactly as he pleased without any law and order, wholesale havoc and mayhem would prevail. Imagine if ownership was not respected and each person was allowed to snatch whatever he wished from the next person, or if life was not respected and people were free to kill each other if they so wished, what would be the situation??? Such a world would undoubtedly be unliveable and unmanageable.

In order to maintain law and order two systems are generally used, both of which revolve around the concept of facing consequences. These are the systems of punishment and incentive. Through these two systems discipline is engendered and maintained.

By implementing both systems, a healthy and effective balance is maintained, since the individual is motivated to excel and perform as he will be duly rewarded, and he is also discouraged from shirking as he will be punished accordingly.

Likewise, if the son failed his exams, or ‘borrows’ his father’s car and damages it irreparably, he is ground and punished in numerous ways, all meant to instil a deep lesson within him and compel him to feel remorse. If the husband treats the wife unfairly or badly, she sometimes gives him the ‘silent treatment’ in order to impress upon him the extent of her unhappiness.

However, there are very few homes in which this system is implemented for the sake of progressing and excelling in Deen. How many homes impose a punishment or penalty upon the children – or even upon the adults – for missing a salaah? How many households are disciplined when the daily portion of the Quraan Majeed is not recited, or some sin is committed?

We tend to value and show importance to school achievements, wealth and our reputation in society. Hence we make an effort to excel in these departments. What we have failed to realize though, is that a loss in Deen is far more serious and detrimental. Nabi (sallallahu ‘alaihi wasallam) has said, “The one who misses one salaah, it is as if his family and wealth have been destroyed.” (Saheeh Ibni Hibbaan #1468)

From this day onwards, let us strive to give due importance to our Deen and impose a penalty on those who miss their salaah, etc. At the same time, if they progress and excel, let us reward them and encourage them.

However, let us remember that the punishment and reward should be proportionate to the deed committed. Hence, a mere ‘tap on the wrist’ is insufficient for missing salaah. Likewise, a small child should not be beaten mercilessly for a small mistake. Also, when rewarding, let us give greater rewards for achievements in Deen than we do for dunya, as Deen is infinitely more valuable than the dunya.

Share
Previous Blessing in Disguise
Next How Should a Muslim view a Calamity?

Why do males inherit more than females?

Soulmates & Despondency in getting Married