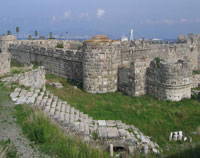 Muhammad bin Seereen (rahimahullah), a famous narrator of hadeeth and student of the Sahaabah (radhiyallahu ‘anhum), was once travelling with a group of people when they decided to encamp for the night at a riverbank. As they were setting up camp, the people of the area approached them and advised them saying, “Go further on. Every person who attempts to camp here gets robbed.” On hearing this, the entire group packed up and departed to camp elsewhere – with the exception of Muhammad bin Seereen (rahimahullah). He stayed behind, alone and fearless, trusting in the security provided by the aayaat of protection he recited.

Muhammad bin Seereen (rahimahullah) then narrates the events that ensued. He says:

“I had not yet fallen asleep when I actually saw the robbers. They were wielding drawn swords. They tried to come near me more than thirty times but were unable to draw near. Knowing that I was safe, I slept soundly until the morning. When it was morning, I packed up and departed, continuing my journey. As I travelled, I suddenly encountered one of the robbers who was carrying a bow and seated astride a horse with a huge, bushy tail. He called out to me and asked, “Are you a human or jinn?” “A human – from the descendants of Aadam (‘alaihis salaam)” I replied. He was stunned to hear this and asked, “But what’s your secret then? We tried to get to you more than 70 times but were blocked by an iron wall every time!” I replied, “The secret is a hadeeth which Ibnu ‘Umar (radhiyallahu ‘anhuma) narrated to me from Nabi (sallallahu ‘alaihi wasallam) who said, ‘Whoever recites thirty-three verses of the Quraan Majeed at night, he will not be harmed by an unexpected predatory animal and, together with his family and wealth, he will be in complete safety and ease until the morning.’” When I completed narrating the hadeeth, he was so affected that he descended from his horse and broke his bow, promising Allah Ta‘ala that he would never again return to a life of robbery.”

The verses mentioned in the hadeeth are:

1. These verses – together with other established verses of protection – are contained in the “manzil” and by reciting these verses every night, we too can ensure that we are completely protected and safeguarded together with our families and belongings.

2. The level of Muhammad bin Seereen (rahimahullah)’s conviction in the protection afforded by these verses was such that he was prepared to spend the night alone in a place that was known to be frequented by robbers. This level of conviction is what is required to make our du‘aas and other actions produce the desired results.

3. These verses are so powerful that they literally formed an iron wall to protect Ibnu Seereen (rahimahullah) which the robbers could not penetrate despite making 70 continuous attempts.

An Open Letter To Muslim Parents

The Cure to Black Friday/Cyber Monday