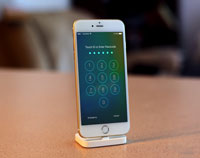 In an age where kidnapping, child-trafficking, child-abuse, drug addiction, gangsterism and other societal scourges are on the rise, almost every parent will, at some point, stress and emphasize on their children the danger of strangers. Parents warn their children to never take a lift with a stranger, never speak or disclose personal information to a stranger and never accept a gift from a stranger. In short, they urge them to never stay close to strangers.

Such is the concern for safety that if any father hears a sound in the yard (let alone in the house itself), he will rush to the defence of his near and dear ones. He will press the panic button, grab his gun, switch on the flood lights and phone the neighbours.

Alarmingly, the situation, at present, has deteriorated to the point where the danger of a stranger is no longer a mere potential threat waiting to strike – it is a concrete reality. Strangers have invaded our homes and have taken up permanent residence. They may not leave their toothbrushes in the bathroom and socks in the laundry basket, but what they leave is far worse – they leave an indelible impression on the hearts and minds of our easily-influenced children. These are the strangers that accompany the TV, internet and technology.

Let us view the issue from a different perspective:

– If a world-renowned homosexual man, who is the face of a gay-rights campaign, approached us and asked to have a conversation with our child, would we allow it? Obviously not!

– Likewise, if a Satanist leader of a famous rock band wanted to spend a few minutes with our child, would we permit it? Definitely not!

– If our child was invited by a Christian to observe his wedding rituals in a church, would we consent? Never!

– If a Hindu boy asked us to speak to our daughter in isolation, would we give him the go ahead? No!

Through technology and the internet, our children can easily engage in all of the above. Worst of all – we would be none the wiser. By reading an article of the homosexual, or watching a clip of his, our child would effectively be ‘conversing’ with him. By listening to the songs of the Satanist, our child would effectively be in his company, pondering over his message. By watching a movie with the scene of a Christian wedding, it would be as if our child was there, in the church, witnessing the rituals. Finally, through the ease of chatting, many youngsters, male and female alike, are chatting to all and sundry. Group chats… Private chats… Video and picture sharing… The unspoken rule is that ‘anything goes’ – as long as you don’t get caught.

The reality is that the walls of our home are only effective at preventing our children from physically going out. The walls have not managed to keep the strangers from coming in, and whether we are prepared to admit it or not, the fault vastly lies with us – the parents.

Ideally, children should not have their own phones, tablets, computers, etc. as there is generally no genuine need faced by the child that cannot be fulfilled without these devices. However, since almost every child already has these devices, how can the parents ever leave them ‘to their own devices’ without any supervision?

How can a caring and loving parent, who wishes the safety and success of their child, give the child unbridled and unchecked freedom and then hope for the best?

The solution to ‘stranger danger’ is strict device monitoring and control. Parents should have complete access to their children’s devices, and should regularly go through their messages, pictures, chats, etc. without prior notification.

One easy method which can be implemented to exercise control is to make use of parental control apps. Via these apps, parents are able to permit or restrict whatever functions of their child’s phone that they wish (messaging, videos, online shopping, etc). Furthermore, some of these apps even inform the parents when their children attempt to access restricted content, allow the parents to ‘lock’ the device (for a duration of time e.g. bed time, home ta’leem time, meal times, homework time, etc), assist the parents to track the child’s physical location and even let the parent monitor the child’s messages via the parent’s own phone.

Nevertheless, regardless of the regulatory method adopted, the point is that some effort must be made in this regard. There are simply too many cases where parents learn of their children’s tech-abuse after it is too late. They believed their children to be innocent until they were forced to accept (may Allah Ta‘ala forbid) that their son is a drug addict burning up the party scene or their daughter is pregnant. Let us not wait for that day to come. Instead, let us implement precautionary measures from now.

May Allah Ta‘ala protect us and our progenies from the challenges and evils of the time, aameen.