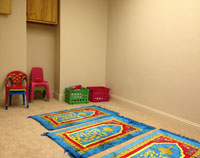 Every mother knows that it is impermissible for a child to breastfeed after the age of two. At the same time, mothers understand that their infant children cannot progress from a purely milk-based diet to a diet of solids overnight. If this drastic, unfamiliar change is thrust upon the child in an instant, he will struggle to adapt and his digestive system will suffer.

In exactly the same way, we all know that once a child becomes baaligh (reaches the age of maturity), it is compulsory for him to perform all the five daily salaah on time. Furthermore, in the case of a male, these salaah will have to be performed in the masjid.

Just as a mother begins weaning her breastfeeding child in advance, and gradually introduces solids to him, so that when he is two years of age, he is already accustomed to solids and can easily make the transition, the parents should adopt the same approach for their children’s salaah.

As parents, it is really an injustice and unkindness on our side that we fail to teach our children the importance of salaah when they are young, and thereafter, when they are teens, we suddenly expect them to have perfect punctuality on their salaah. Although they are responsible and answerable for their own actions at this time, we will undoubtedly have a share in their sin of neglecting salaah as we are partially to blame.

The effort must be made to teach the children the importance of salaah. This is easily achieved through reading the chapter ‘Virtues of Salaah’ to our children in our daily home ta’leem of Fazaail-e-Aa’maal. Mothers should make their daughters and small sons perform salaah with them so that they learn the concept of salaah and develop eagerness for it.

Once a son reaches the age of seven, his father should begin taking him to the musjid. However, before doing so, the father must ensure that his son understands the sanctity of the masjid and knows how to conduct himself correctly. Thereafter, he must monitor his son and discipline him appropriately so that his son does not disturb others and become a nuisance in the masjid. In this regard, small children that do not understand the sanctity of the masjid should not be taken to the masjid.

Training our children in this manner is not only compulsory – it is a highly-rewarding investment and one of the ultimate acts of kindness that we can show them. Every single time our child performs salaah, until the day he or she passes away, we will be rewarded, as we taught them to perform salaah.

May Allah Ta‘ala bless us all to be punctual on our salaah and train our children correctly.