When the Goings Get Tough … 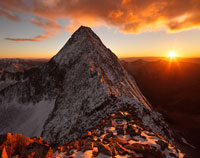 As she lay in bed, Faatimah could not help but stare glaringly at her beautiful doll, “baby Saalihah”, who was the apple of her eye. Tears streamed down her cheeks as she began to reminisce about the magical moments of joy and happiness that she enjoyed in her short-lived marriage, which ended in the tragic death of her ‘prince charming’. The fatal motorcar accident will forever remain etched in her mind.

It was a life she had dreamt of, after having lived her infancy and youth as an orphan. However, she never expected her dreams to materialise, and then be snatched away after such a short span of time.

She had barely staggered out of that ordeal when she suffered another blow. Her little “baby Saalihah” was diagnosed with leukaemia. She was her last straw of hope that she could clutch on to, and now she had little or nothing to live for – hoping only for the best. Every coming day was to be faced with the realisation that the fate of her daughter was unknown.

“It never rains, but pours on some”.

Just a day before “baby Saalihah’s” diagnosis, she was handed a two-weeks-notice by her landlord! He required the flat for a close relative of his. It felt as if there was no end to the list of problems and complications she was enduring and braving.

As a single mother, she now needed to see to the intensive medical treatment of her ‘little angel’ and also find a place to live. And all of this had to happen in double quick time!

With all these thoughts plaguing her shattered mind and heart, Faatimah looked out of the window to experience the spectacular scene of a fading cloud-cover over a brilliant full moon.

This spectacular scene reminded her of the fact that life will have its brilliant and enjoyable moments. But there shall also be periodic patches of darkness and dimness. Life will definitely pose its challenges, but they play a great role in us appreciating the ease and comfort that was enjoyed before, and that which will be enjoyed in the future.

Life in this world is exactly the same.

There would be times of extreme happiness and joy, days of immense gloominess and murkiness, and days with a mixture of both.

In essence, life can never be a ‘bed of roses’ without thorns.

As this realisation struck her, she understood deep down that crying and complaining will be of no avail. She needed to be strong at heart, having a deep rooted conviction in the Alleviator of all hardships and worries, Allah Ta‘ala, and understanding that He alone in His infinite wisdom knows why this ‘thick cloud cover’ had overwhelmed the ‘brilliant sheen’ in her life.

A spark of hope was now ignited in her heart causing her to forget her sorrow and grief. It was as if an entire mountain was lifted from her head.

Indeed life is a severe test and struggle! For some it’s a test in luxury and affluence, while for others a test in difficulty and adversity. However, a successful woman is she who does not succumb to the emotional ploys of Shaitaan and begins blaming others for her predicament, nor does she become oblivious of the Great Being who has put her to the test.

Initially, exercising patience will be difficult and burdensome, but when one is determined, then Allah Ta‘ala will divinely strengthen that person. Nabi (sallallahu ‘alaihi wasallam) said: “He who persistently adopts sabr, Allah Ta‘ala will bless him with sabr.” (Saheeh Bukhaari #1469)

Imagine a person appearing on the Day of Qiyaamah without having to render an account of his deeds and he then receives his rewards without any restrictions and limits. Imagine his emotions when his rewards will continue to be heaped onto his scales of deeds.

How fortunate and privileged will such a person be!

Indeed this will be the case for those who patiently bore the hardships and difficulties that they underwent in this worldly life. Allah Ta‘ala states in the Quraan Majeed: “The saabiroon will be granted their reward in full without any measure (and limit).” (Surah Zumar v10)

Ibnu ‘Abbaas (radhiyallahu ‘anhuma) reports that Nabi (sallallahu ‘alaihi wasallam) said: “A martyr will be brought forward on the Day of Qiyaamah and he will be made to render an account of his actions. Thereafter, a generous person will be summoned and he will also be made to render an account of his actions. Eventually, those who were afflicted with difficulties and calamities (and bore them with tolerance and patience) will be called forward. No scale will be erected for them, nor will any register of deeds be placed before them. Instead, rewards will be showered and heaped over them, to such an extent that on seeing the rewards that they are receiving, those who passed their worldly lives in comfort and ease will begin to wish at that moment – if only had their bodies been slit with scissors in their worldly life – they too could be entitled to such rewards.”(Majma‘uz Zawaaid #3817)

Who could be better examples than Rasulullah (sallallahu ‘alaihi wasallam) and the Sahaabah (radhiyallahu ‘anhum) in displaying what sabr really means.

This was none other than Asmaa’ bintu Abi Bakr (radhiyallahu ‘anhuma).

There was hardly a difficulty that women presently face, which she had not undergone. If we speak of domestic problems then she experienced it as a daughter and as a wife.

Her illustrious father, Abu Bakr (radhiyallahu ‘anhu) had divorced her mother Qutailah when she was young. Hence, she grew up with a step mother. After many years of marriage with Zubair (radhiyallahu ‘anhu) she was unable to gel and blend with his temperament. Hence, this eventually led to them parting ways.

If we look at her financial standing, here too she had undergone constraints. In her advanced life she lost her sight, and in this state, her illustrious son ‘Abdullah bin Zubair (radhiyallahu ‘anhuma) was mercilessly slain by the infamous Hajjaaj bin Yusuf.

Despite all these difficulties, she never became suicidal, or as we would say, a ‘loony’.

She understood that this was all a test from Allah Ta‘ala. Hence she patiently underwent these difficulties while placing her trust and hope in Allah Ta‘ala alone, and turning to Him only!

There was no need for counselling or requesting a Moulana for a ta’weez or a special wazeefah. She fully understood that life will certainly have its cloud-covers but only to reap the rewards of the Hereafter.

Hence, adopting her approach in facing the challenges of life will definitely bring about ease and serenity in our hearts and mind, and allow life to be a pleasant and comforting experience.

In all of this tragedy, test and trauma, she maintained her loyalty and allegiance to Allah Ta‘ala. Her predicament did not make her oblivious of the fact that she was after all a bondswoman of Allah Ta‘ala.

In fact, on one occasion after making hijrah to Madeenah Munawwarah, her mother Qutailah who was a disbeliever paid her a visit. Naturally, a woman would rush forward to receive her mother. And why not, when they last met more than six years previously?

A mother is after all the person a woman would normally turn to when she experiences any problem or undergoes any difficulty. This was certainly not the case with Asmaa’ (radhiyallahu ‘anha). Upon her mother’s arrival, she declined to entertain her and accept the gifts that she had brought unless she first sought permission from Nabi (sallallahu ‘alaihi wasallam).

What a mighty lesson for each one of us?

Emotions cannot override the laws of sharee‘ah. Deen has the greatest priority in every person’s life. Whether it is a wedding, a funeral, a family get-together or any other situation, the pristine yet simple deen and sunnah of Nabi (sallallahu ‘alaihi wasallam) must be upheld under all circumstances.

If one is unsure regarding a matter, then first enquire from those who are knowledgeable, righteous and experienced.

Rashly and foolishly many rush into doing things and enquire only after the action – only to realise that they had broken the laws of deen. Why should one put oneself into such dilemmas when the simple solution is – first refer to those who know before embarking on any matter.

Even when it comes to solving a problem or overcoming a predicament, one should only act after:

– receiving guidance from those who know;

– adopting only those methods and means that are approved by the sharee‘ah.

Beautiful Nazm/Nasheed on our Beloved Parents