A Sweet and Simple Nikaah 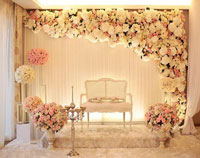 Sa‘eed bin Musayyab (rahimahullah) was an illustrious Taabi‘ee who was the son-in-law and student of Sayyiduna Abu Hurairah (radhiyallahu ‘anhu).

After a few moments had passed, Sa‘eed bin Musayyab (rahimahullah) asked me, “Have you looked for another wife?” I replied, “May Allah Ta‘ala have mercy on you! Who would get me married whereas I possess no more than two or three dirhams?” Sa‘eed bin Musayyab (rahimahullah) answered, “I will get you married (to my daughter).” In astonishment, I asked, “Will you really get me married?” He replied, “Yes,” and thereafter recited the khutbah by praising Allah Ta‘ala and sending salutations on Rasulullah (sallallahu ‘alaihi wasallam). He then performed my nikaah.

After my nikaah was performed, I stood, and I was possessed by such joy and happiness that I did not know what to do! I returned to my home and began to ponder over which people I could approach for a loan. When it was the time of Maghrib Salaah, I performed my salaah and again returned home. I was alone and had been fasting, so I prepared to break my fast with a simple supper of bread and olive oil. At that moment, I heard a knock on my door.

I called out, “Who is it?” The person knocking replied, “Sa‘eed.” I thought of every person named Sa‘eed besides Sa‘eed bin Musayyab (rahimahullah), as for the past forty years, he had only been seen on his way from his home to the musjid, or going from the musjid to his home. When I went to the door, I was surprised to see that it was Sa‘eed bin Musayyab (rahimahullah). Seeing him, I began to think that he had changed his mind (and regretted marrying me to his daughter). I said to him, “O Abu Muhammad! Why did you not send for me so that I would have come to you (instead of you taking the trouble to come to me)?” Sa‘eed bin Musayyab (rahimahullah) replied, “No, you are more worthy of me coming to you. You were without a wife, and you are now married, so I did not want you to spend the night alone. Here is your wife.” As he said that, I saw her standing behind him. He grasped her hand, led her into my home, and then left, closing the door behind him.

My wife, the daughter of Sa‘eed bin Musayyab (rahimahullah), immediately collapsed, overwhelmed by extreme hayaa and modesty. I secured the door and placed the plate containing my meager supper in the shadow of the lamp so that my wife would not see it. I then climbed to the roof of my home and called out to my neighbors. They soon assembled and asked me what the matter was. When I explained my situation to them, they hastened to assist me. Soon, the news reached my mother and she also arrived.

When my mother came, she said to me, “It is haraam for you to look at my face if you touch your wife before I first pamper and prepare her for three days.” I thus waited for three days after which I began to stay with my wife.

I found my wife to be the most beautiful of women, and a woman who had excelled in memorizing the Quraan Majeed and the ahaadeeth of Rasulullah (sallallahu ‘alaihi wasallam). She was also fully aware of all the rights of the husband.

When all the people had departed and we were alone, he asked me, “How is that person (referring to his daughter)?” I replied, “She is excellent, O Abu Muhammad! She is as a well-wishing friend would wish her to be for me, and as an enemy would dislike her to be for me.” Sa‘eed bin Musayyab (rahimahullah) said, “If you have any problem then discipline her.” I thereafter returned home, after which Sa‘eed bin Musayyab (rahimahullah) sent me a gift of twenty thousand dirhams. (Siyaru Aa’laamin Nubalaa vol. 4, pg. 233)

Note: May ALLAH make all marriages as simple and sweet as this Nikah and save us from the extravagance, wastefulness, boasting, ostentation and haraam music, videoing, gender mixing and all other western hollywood, and bollywood style unislamic influences that have seeped into our nikahs. Millions of rands are wasted whilst Muslims are suffering in many parts of the world.