Whilst the official line is that the Turkish soldiers were martyred by Syrian regime air strikes, many on the ground are claiming it was in fact the Russians,[2] who together with Iran have helped the Syrian regime recover from the brink of defeat and continue to cause the deaths, suffering, and starvation of millions of Syrians.

The air strike occurred shortly after the city of Saraqib was liberated by Turkish-backed forces.[3] The city is a key strategic town on the M5 motorway that connects all of Syria’s major towns together and which is a high priority for the Assad regime.[4]

Little international support has been forthcoming for Turkey’s action in Idlib, which started after the 2018 ceasefire lines were broken and Turkish observation posts came under attack, resulting in the deaths of at least 54 Turkish soldiers since the start of February.[5] Reacting to the events on the ground, ambassadors from the NATO alliance held emergency talks this morning, with Secretary-General Jens Stoltenberg commenting:

“This dangerous situation must be de-escalated to avoid further worsening of the horrendous humanitarian situation in the region and to allow urgent humanitarian access for those trapped in Idlib. We urge an immediate return to the 2018 cease-fire.

“Today’s meeting is a sign of solidarity with Turkey, which has suffered the most terrorist attacks and which hosts millions of refugees.”[6]

Assad’s assault on Idlib is causing thousands more to flee towards the Turkish border. With an excess of 3.7 million refugees already in Turkey, however, unnamed officials today said they are lifting border controls to the EU as they can “no longer keep the doors closed for refugees who want to go to Europe.”[7] The presidential communications director Fahrettin Altun tweeted:

This murderous regime has refused to honor its commitments under the Astana process. Turkey has exercised its right of self-defense and abided by the international law in its operations aimed at preventing a humanitarian disaster in Idlib.

Assad regime has been conducting ethnic cleansing & seeks to drive millions of Syrians out of Idlib. These people will try to escape to Turkey and Europe. Already hosting close to 4 million refugees, we do not have the capacity and resources to allow entry to another million.

The regime has taken advantage of the international silence in the face of its crimes for years. Abandoning Idlib to its fate will mean that the regime’s dreams will come true. They have been pursuing demographic and ethnic cleansing in this region. We cannot look the other way!

Millions of civilians are being bombarded by air for months now. Infrastructure, including schools and hospitals, is being targeted by the regime systematically. A genocide is happening slowly before our eyes. Those with conscious and dignity must speak up!

Hundreds were seen heading towards the border with Greece.[8] Reports have stated that the Syrian community in Istanbul had began arranging buses to transport refugees to the borders.[9] Greece has reacted by boosting police presence on the border.[10]

Many in the international community have called for calm. UN spokesman Stephane Dujarric released a statement warning that “without urgent action, the risk of even greater escalation grows by the hour.”[11] A US department spokesman said that the US stands by its ally Turkey but called for “for an immediate end to this despicable offensive by the Assad regime, Russia and Iranian-backed forces.”[12]

President Erdogan has vowed that Turkey will push the forces of the Syrian regime away from its military in observation posts in the Idlib region of Syria.

Despite the threat of the Russian-backed military, President Erdogan told his party in a speech:

“We are planning to liberate our observation posts from the surrounding [Syrian government forces] by the end of this month, one way or another.”

This week, Syrian fighters, backed by the Turkish military, seized the town of Nairab in Idlib. Assad has continued to send troops to advance into other areas of the Idlib province.

Earlier this month, President Erdogan said that President Assad must withdraw his forces to behind a line of Turkish posts before March, or else the Turkish military would force their hand. Idlib is currently controlled by Russia, which is home to the region’s airspace. Turkey therefore cannot use the airspace, although President Erdogan hopes they will find a solution soon.

This particular region has been responsible for Russian airstrikes targeting civilians throughout Idlib. The region has also seen the bombing of Turkey-backed rebels for a number of months in support of the Syrian regime, even targeting schools and hospitals. [1] 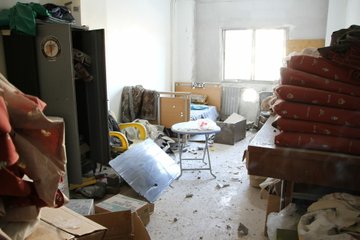 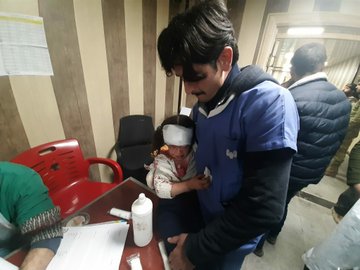 It’s made by #Russia, as is its Urugan (“hurricane”) launcher.

This one landed in a kindergarten in #Idlib, this morning.

Fortunately, it didn’t detonate, or release its submunitions. 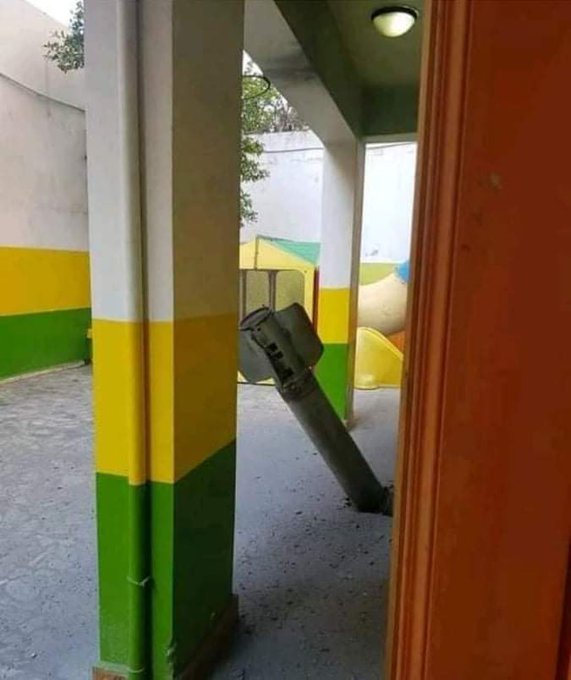 Consequently, hundreds have been killed and almost one million displaced, leaving them to survive in the bitter winter period.

“I had the dilemma of wither I should empty my house or not. But were would I go? Sadly the choices are limited for those who are living in the city. Most have decided it is better to stay in their own homes, instead of dying without a shelter on the border.”

President Erdogan also said that Turkey is adamant to help the Syrian civilians displaced from Idlib because of the heavy fighting.

“We will not take a smallest step back in Idlib, we will certainly push the regime outside the borders we designated, and ensure the return of the people to their homes.” [2]

Dr Shajul Islam dispelled common theories many had with regards to Turkey:

“All praise be to Allah, Turkey is now fully supporting the most powerful rebel group in Idlib. It seems this has the potential to produce good results with the permission of Allah.”

“Today we had more Turkish soldiers die on the battlefield than rebels. For all those that are still in doubt if Turkey is serious, these figures should speak for themselves. Now instead of flying Turkish soldiers out to Turkey for treatment, they are using our hospital in Idlib for treatment.”

“The important & strategic town of Saraqib- just miles away from Idlib City- was liberated from the Syrian gov early this morning by Turkish forces & rebels! They are continuing to push the gov back in nearby towns & taking back more territory!

No one knew what Turkey’s intentions were initially. But we judge based on what we see – we have seen them provide the rebels with equipment they never had before to defend civilians and counter-attacks, sacrifice their soldiers, as well as unite with & fight alongside rebels against the Syrian regime. There is no denying that Turkey is playing a vital, game-changing role so far in the fight against the regime criminals.

Inshallah, these new allies can keep the momentum up & civilians can soon return safely to their towns without fear!”