Save the Low Pan! – Eastern Toilet 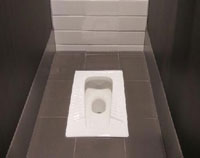 For centuries and centuries, since the beginning of time, the natural position that people globally adopted for relieving themselves was that of squatting. Indeed, this position is so natural that a child instinctively adopts it when he needs to relieve himself.

It was only around the seventeenth century that Lord John Harington invented the high-pan toilet. Despite the years that have passed since its inception, and its popularity among certain classes of society, more than half the population of the world still squat to relieve themselves.

Squatting has numerous Deeni as well as health benefits. When a person squats, there is no water directly below him – as is the case with the high-pan toilet. As it is well known, the high pan toilet has a tit-for-tat – or rather ‘splish for splash’ attitude. Suffice it to say that a person using the high-pan toilet is at great risk to suffer a splash-back. This not only messes a person’s body with najaasat (impurity) which renders salaah null and void, but is also the cause of one suffering painful punishment in the grave.

Furthermore, when a person uses the high-pan toilet, his thighs and buttocks are in contact with the seat – a seat on which countless people sat before him. Without first washing and cleaning the seat, there is no way for one to know whether the seat is truly hygienic or not.

From a health perspective, doctors have only recently ‘discovered’ the benefits of squatting. In a nutshell, squatting allows a person’s colon to straighten, facilitating easy, effortless movement. On the contrary, when a person is seated on the high-pan, his colon is bent, due to which he has to strain and push in order to relieve himself. This unnecessary straining and pushing harms the colon and leads to fissures (tears in the colon) and other health complications.

Another observation is that people who squat tend to relieve themselves in a much shorter span of time compared to those seated on the high-pan. Because sitting on the high-pan hinders the movement of the bowel, prolonging the toilet session, people have now resorted to reading magazines, novels or even using their phones in the toilet in order to pass the time! The toilet is a place of filth and Shayaateen, and should thus be frequented for as short a duration as possible. However, people are now all too comfortable in the loo and thus unnecessarily spend up to twenty minutes at a time on the pan!

The west, in a misdirected effort to enjoy the benefits of squatting, has invented contraptions such as the ‘squatty potty’ and other similar squat-stools. Although this may assist with the bowel movement, this does not address the ‘splash-back’ dilemma with which all high-pan users are faced.

The solution is much simpler – the low pan toilet. We need to keep the low pan toilet chained to our homes – not flushed out of our lives. If we are able to, let us install these toilets in our homes and teach our children how to use them correctly. Only those who cannot use the low pan at all due to old age or ill health (such as knee problems) should use he high pan – and that too with extreme care.

How do we lawfully entertain ourselves as teenagers?

Allāh has kept it no secret: as long as man lives, he shall not …