Home | *Blog | Through Thick and Thin

Through Thick and Thin 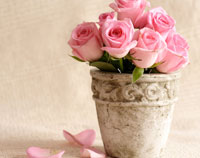 As for the respected wife of Nabi Ayyoob (‘alaihis salaam), there are two views regarding her name. According to some ‘Ulama, her name was Layyaa, while other ‘Ulama have mentioned that her name was Rahmah.

While Nabi Ayyoob (‘alaihis salaam) was patiently enduring this test, most of the people abandoned him, until he was left alone in a corner of the town. However, his loyal wife never left him or abandoned him. She remembered his favour upon her when conditions were favourable, and hence she remained at his side through thick and thin, ever loyal and faithful.

She would patiently tend to him and see to all his needs. In some narrations, it has even been mentioned that when her wealth was eventually depleted, she began to carry out domestic work in peoples’ homes in order to earn a living and see to her ailing husband’s needs. Together with this, she had lost her children and her husband was extremely sick. Through all these tests, she remained patient and did not complain, even though she went from a life of comfort and happiness to one of difficulty and sadness.

1. The proverb “a friend in need is a friend indeed” is often quoted, highlighting the fact that a true friend is one who will remain with you in difficult times as well as good times. We can well imagine that if such loyalty is expected of a good friend, then what must be the high level of loyalty that is expected of a true spouse? After all, the relationship between the husband and wife far surpasses any friendship! Hence, a true, loyal wife is not one who will abscond to her father’s house when “the goings get tough”. Rather, she will patiently remain with her husband and assist him, to the best of her ability, as she would expect of him had she been in difficulty.

2. Undergoing tests is an unavoidable occurrence in life. We cannot choose the nature or time of our tests – but we can choose to pass the tests. To do so, we will have to hold firmly to sabr (patience) and remain pleased with the decision of Allah Ta‘ala.

Share
Previous Is Hajj Fardh on the Wali of a woman who has the financial means?
Next Sitting and Drinking Water