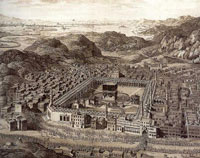 “When last did you, as a mother have a decent discussion with your child, or when was the last time you as a daughter, conversed with your mother?”

You may be already giving yourself a pat on the back, all excited that you will receive full marks for this question, since the last time was a mere moment or just a few hours ago.

But wait a minute …

“Zainab, get in the bathroom!” “Yumna, did you do your homework?” and “Mummy, your silly maid burnt my jeans!”

These are not decent discussions and constructive conversations.

I’m referring to the intimate exchanges, where the daughter confides in her mother, and her mother gives her correct guidance on how to weather the tempestuous tornadoes of life and navigate herself to calmer waters.

Below are a few paraphrased snippets of a rich conversation, brimming with lessons, that took place between a seventy three year old son and his hundred year old mother, just a few hours before sacrificing his soul in the path of Allah Ta‘ala.

Guess what? … If you thought you’re too old to speak to your mother, I bet you’re not yet seventy three!

The son, who was besieged in the best of lands, Makkah Mukarramah, ‘traitored’ by not only his men, but even his own blood (sons), approaches his aged and blind mother and presents his predicament to her. He enquired whether he should accept the offer of his enemy to surrender on any sum of wealth.

You would most probably be expecting her to say:

“Accept the offer, spare your life and serve your aged mother.”

But her answer was totally different and absolutely mind-boggling.

Her firm reply was:

Wow! A hundred year old woman exhorting her son to reject the offer, ignore the odds and fight in the face of death!

The least you can do, my sister, is to encourage your children towards righteous activities and not become an impediment in them progressing in deen.

The son draws closer, kisses his mother on the forehead and responds:

“By Allah! Neither was I inclined to the material possessions of this temporary life, nor did I desire to live longer in it. The sole reason for me posing this question to you was to ascertain whether you are backing me in my decision to persevere and lay down my life. Now, you have only added to my resolve.”

He then goes on to console and comfort her saying:

“O my beloved mother! I will be martyred very shortly, so don’t allow your grief over my loss to consume you, rather be pleased with the decision of Allah Ta‘ala. Take solace from the fact that throughout his life your son neither committed an intentional sin, nor has he indulged in a shameless act ever. The be all and end all in his life was the pleasure of his Creator.”

“O my son! Continue with your mission. I am optimistic that Allah Ta‘ala will grant me the courage to bare your loss patiently.”

Who do we marvel at? Is it the son who stood out, or the mother who withstood?

Never forget! As you sow, so shall you reap.

If you sow the correct values and instil good qualities in your children, they will become the coolness of your eyes when you need them the most – in old age.

The opposite, however, is also unfortunately true.

If you sow the wrong ‘seeds’ in them, or simply neglect them, allowing the weeds of evil to sink their roots into your potential rose garden, the day may come when you will be engulfed by such regret that being beneath the earth will hold more appeal to you than being above.

The dialogue doesn’t end here. He now requests his mother to make du‘aa for him, to which she responds:

“I always make du‘aa for you.”

Imagine his emotions, the heaviness he must have felt in his heart, the lump in his throat, and the tears in his eyes. Yet, he knew that if anything would benefit him, it was his mother’s incredible and powerful du‘aas.

At that critical juncture, she supplicated in these words:

“O Allah! Pity the lengthy rakaats of salaah that he would offer, the raging thirst that he endured (during his optional fasts) in the scorching heat of Makkah and Madeenah, and have mercy on him due to his obedience to his mother and father. O Allah! I have handed him over to You and I am totally at ease with Your decision. So reward me on his loss, the reward of the patient and the grateful ones.”

To you, who are fortunate enough to still enjoy the affectionate shade of a parent! Value it before it’s too late. Don’t just ask for du‘aas but take du‘aas(i.e. serve them in a way that they feel obliged to make du‘aa for you).

And as a parent, never underestimate the power of begging Allah Ta‘ala on behalf of your little ones. While they may not be going to battle against an outward enemy, they are definitely often fighting a losing battle against the ever-increasing forces of the devil.

Next, the aged mother asks her son to come close. She then embraces and kisses him bidding him farewell before he embarks on his one way journey to the Hereafter, never to return.

Just close your eyes and imagine the scene; an old woman, a hundred years old, embracing her son who was the “coolness of her eyes and a delight to her heart”, knowing that this was the last time she would ever meet, touch and smell him.

As she hugged him, she felt the hardness of his armour, and commented:

“O my son! If you truly desire martyrdom, I don’t expect you to wear this.”

“O my mother! I only wore it to keep you at ease and to comfort you.”

What an invaluable lesson indeed! We should leave no stone unturned in bringing comfort to our elderly and make it our mission to save them from the least bit of inconvenience.

The mother, who’s resolve was firmer than the plate of his armour, instructed her son to remove it. Thereafter, as he donned the rest of his clothing, she urged him to ensure that his lower garment was fastened tightly so that his ‘awrah does not get exposed when he falls to the ground as a martyr.

Amazing! Look at her concern! She was prepared to accept her son as a martyr but could not tolerate his ‘awrah being exposed in the process!

Here is a situation where steps are being taken to ensure that the body is not exposed after death. We, on the contrary, go out of our way and even spend a fat sum to acquire the garment which is most revealing, just to look ‘gorgeous’ according to today’s warped definition of the word.

If you have not yet figured out who this outstanding son and ‘withstanding’ mother was … it was none other than Sayyiduna ‘Abdullah bin Zubair (radhiyallahu ‘anhuma) and his patient, enduring and tolerant mother, Sayyidah Asmaa’ (radhiyallahu ‘anha).

From the moment you hold your baby in your arms,
you will never be the same.
You might long for the person you were before,
When you have freedom and time,
And nothing in particular to worry about.
You will know tiredness like you never knew it before,
And days will run into days that are exactly the same,
Full of feedings and burping,
Nappy changes and crying,
Whining and fighting,
Naps or a lack of naps,
It might seem like a never-ending cycle.
But don’t forget …
There is a last time for everything.
There will come a time when you will feed
your baby for the very last time.
They will fall asleep on you after a long day
And it will be the last time you ever hold your sleeping child.
One day you will carry them on your hip then set them down,
And never pick them up that way again.
You will scrub their hair in the bath one night
And from that day on they will want to bathe alone.
They will hold your hand to cross the road,
Then never reach for it again.
They will creep into your room at midnight for cuddles,
And it will be the last night you ever wake to this.
One afternoon you will sing “the wheels on the bus”
and do all the actions,
Then never sing them that song again.
They will kiss you goodbye at the school gate,
The next day they will ask to walk to the gate alone.
You will read a final bedtime story and wipe your last dirty face.
They will run to you with arms raised for the very last time.
The thing is, you won’t even know it’s the last time
Until there are no more times.
And even then, it will take you a while to realize.
So while you are living in these times,
remember there are only so many of them
and when they are gone, you will yearn for just one more day of them.
For one last time.
http://uswatulmuslimah.co.za/
Share
Previous Children’s Behaviour
Next Syria: International crisis looms as Syrian regime forces advance on Idlib