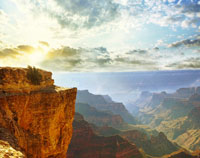 Sayyidah Zinneerah (radhiyallahu ‘anha), the Sahaabiyah of Nabi (sallallahu ‘alaihi wasallam), was a slave from Rome. She accepted imaan in the very early stages of Islam. On account of her Islam, Abu Jahal and the other disbelievers would torture and persecute her.

After accepting Islam, Sayyidah Zinneerah (radhiyallahu ‘anha) lost her eyesight and became blind. As soon as this happened, the disbelievers began to mock and taunt her saying, “Laat and ‘Uzzaa (two idols that were worshipped by the disbelievers) have made you blind because you have rejected and disbelieved in them!”

In the face of their taunts, Sayyidah Zinneerah (radhiyallahu ‘anha) remained resolute and declared, “Laat and ‘Uzzaa are not even aware of who their worshippers are (as they are lifeless idols, so how can they blind me?). Rather, my blindness is from Allah Ta‘ala, and He is capable of restoring my sight.”

Noticing the torture that she was suffering, Sayyiduna Abu Bakr (radhiyallahu ‘anhu) purchased Sayyidah Zinneerah (radhiyallahu ‘anha) and set her free (as he had done with many other slaves who were tortured due to accepting Islam). (Usdul Ghaabah vol. 5, pg. 292)

1. Calamities and difficulties are actually tests from Allah Ta‘ala, to determine the strength of our imaan and the level of our submission to His divine decree. The imaan of Sayyidah Zinneerah (radhiyallahu ‘anha) was so strong that this test did not weaken her resolve or determination in the least.Instead, she placed her trust in Allah Ta‘ala who thereafter restored her vision.

2. Sometimes, it may happen that while a person is repenting and trying to change his life, he suddenly faces a calamity or test (e.g. he cancels his insurance policy, and shortly thereafter his car or house is destroyed). This calamity should not make him lose hope or become despondent. Rather, he should think to himself that Allah Ta‘ala is testing him in order to determine whether he was sincere in his repentance or not. If he was insincere, then at the slightest sign of adversity and difficulty, he will renege on his repentance and return to the sin.

Share
Previous Mass Killings in Texas, US.
Next Washing the Head during Ghusl

10 Points on the Day of ‘Arafah

Abu Hudhaifa Muhammed Karolia In the concluding aayah of The Bride of the Qur’aan, Surah …