Boat Afloat but Couple in Crisis! 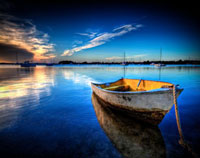 “Beep!” went my phone, rousing me from my sleep. I searched for it on the bedside table with one hand while rubbing my bleary, half open eyes with the other. I struggled to sit up as my fumbling fingers finally found the phone and got a shock when I saw the time. 2AM! I groaned in frustration and wondered which inconsiderate person had texted me at this insane hour. I opened the message, from my best friend, and honestly, as I read the words glaring at me from the screen, I almost had a heart attack: “Its over. We dvrcd. Im cmng hme. Dnt knw wt 2 do!”

I blinked in confusion at first, unable to believe what I saw. This was surely her idea of a sick joke, right? I mean, there’s no way she could already be divorced when she got married just three weeks ago! I suddenly felt weary and sad and tears began to well in my eyes as I wondered how her dream wedding had turned into a nightmare marriage…

To call her wedding ‘an event’ would be an understatement. It was ‘THE event’. Even the local newspapers covered the occasion by plastering her photo on page three with a description of the festivities following on page four. I can still picture the title “Beach Wedding Makes Waves” emblazoned above the article.

Planning her wedding and the events that lead up to it (the engagement, meethu mauru, Arabian night, seafood night, bridal shower, bachelorette party, mehndi, etc.) took her the better part of eight months. We (her friends) stood by her side throughout it all and it was only with our combined support, mostly showed through moments of sympathetic head shaking and fuelled by countless litres of skinny Frappuccino, that Bridezilla made it through to the end.

Being ‘daddy’s little girl’ definitely had its perks – he didn’t even set the sky as the limit to how much she was allowed to spend to make her dream wedding become a reality. Between shopping for her trousseau and the accessories she ‘needed’ for the myriad of functions she had planned, she breezed through every mall in a 100km radius leaving a string of burned out, smoking credit card machines in her wake. There were naturally certain things which couldn’t be bought locally (or so she claimed) and so a flying trip was taken to Dubai and India where she spent a week each, desperately darting between designer stores and jewellery boutiques until she was finally convinced that she had prepared for a wedding which would not be eclipsed for at least the next century.

It was always her dream to have an ‘Emirates’ themed wedding and although we would never have dared say it to her, we did feel she went overboard. I mean, it was already an Emirates themed wedding, ON THE SAND. So was it really necessary for her to ‘import’ an actual Sheikh from Dubai to perform her nikaah? “What about your ustaaz? Won’t he feel hurt? In fact, is he even invited?” we asked. “Nobody will take the Emirates theme seriously without an actual authentic Sheikh.” she explained. “And as for my ustaaz,” she continued, “I’m actually doing him a favour by not inviting him. You know he won’t come anyway, with the music, photography and it being a mixed function.” Having justified her elaborate import instead of putting the function in order, she concluded the conversation and refused to hear more on the subject.

The mehndi was absolutely INSANE. There was a stage decked with huge speakers and microphones erected behind the house. We climbed on and went wild, literally letting our hair down (a bit more than that actually – after all, it was a girls-only event) and dancing while singing Hindi songs. As the festivities were about coming to an end, we got a shock to see the fiancé and his friends running at us (they apparently gained entrance by bribing the guard at the gate), armed with water balloons filled with tomato sauce! As if plastering us in that mess wasn’t enough (it takes AGES to wash out of your hair), they manhandled us and threw us into the pool before escaping into the street, whooping like hooligans all the while.

The kuncha exchanging function was one of a kind and a real trend setter. Still adhering to the Emirates theme, she arranged for a mini luggage carousel to be erected. She then had all the kunchas placed on the carousel and slowly paraded through the house amidst the ‘Oohs!’ and ‘Aahs!’ of the envious guests.

She even demanded that we, the bridesmaids (and myself specifically, the maid of honour), live up to her inflated expectations. Remember the flying trip to Dubai? She returned with a pair of Jimmy Choo’s and Louboutin’s EACH for ALL of us! As we opened the gift bags and screeched in excitement, she triumphantly declared, “We’ll show them how it’s done! We’ll glide down the aisle in style!”

Our makeup (for every function) was applied by a world renowned makeup artist. From MAC to Lancome, his toolboxes modified to carry cosmetics contained secret substances which, in his talented hands, could transform even the ugliest hag into a bewitching beauty. Had he been there, the story of “Beauty and the Beast” would have definitely turned out differently.

“But… He’s a man!” one of us objected. “So what? My dress designer’s a man too. You only get married once, you know. Sometimes you have to just overlook these ‘small things’ to ensure you get the best,” retorted the bride. “Besides, the way he’s dressed, I doubt he’ll have feelings for any of us!” she whispered, attempting to allay her friend’s fears with the disturbing observation that he seemed to be inclined to men.

For the wedding itself, all the guests were shuttled from the parking lot to the beach in carts pulled by camels (genuine Emirates camels of course!). The bride had to make her entrance in grand style and what could be grander than landing on the beach in a hot air balloon draped in bridal satin?

Although the invitations (printed to look like Emirate’s Airline boarding passes) stated that lunch would be served at 2pm, the caterers couldn’t begin serving for another two hours because the bride arrived late (or is late actually considered as ‘on time’ for the bride?). Once she finally arrived and took her seat on the stage next to her husband, the guests had to wait for her brother and sister to give their respective speeches. They took the mike and gushed on about how sad they were to bid her farewell (although she’s actually moving only two streets away). Using a projector and the curtain behind the stage, they even showed photos and videos of her at different stages in her life, pointing out how well she’d outgrown the ‘ugly duckling phase’.

The last ‘hold up’ before the nikaah itself (and the only interval during which the music was switched off) was the qiraat recitation. A few women looked down guiltily (their hair and a lot more than that was uncovered) while the rest of the guests grumbled about how delayed the food was or alternatively, used the time to catch up with old friends.

Towards the end of the afternoon, all the guests gathered to witness the ‘cutting of the cake’. The cake itself was an OUTSTANDING affair – a giant structure measuring 2m in height from its base and shaped to resemble the world famous ‘Burj Khalifa’. Due to its tremendous size, it had to be driven in on the back of a flatbed delivery van.

The highlight, the climax and crescendo to which the entire wedding had been building, was the moment when the bride and groom were rowed off into the sunset (dreamy sigh!) to an exclusively hired cruise ship aboard which they spent their first night.

Two days later, we were all ferried to the cruise ship to celebrate the waleemah. When the bride had forced us to take dancing classes, we took it as a joke. We didn’t realize that we’d be dancing on an actual dance floor to the tune of an actual band!

Once everything was well and over, we all headed back to shore to undress, remove our layers of makeup and crash for the night. We were all too tired to perform the salaahs we missed that day and were asleep as soon as our heads hit the pillow. While we were staggering home in exhaustion, the bride and groom set off on their honeymoon cruise.

Well, we all know how THAT cruise ended – wrecked on the rocks. THE BOAT’S STILL AFLOAT BUT THE COUPLE’S IN CRISIS. All that’s left of their marriage are the wedding DVDS, no longer a source of pride but another skeleton to add to their closet.

Now that I think over my friend and her ‘dream wedding’, the hours and hours of preparation that she put into it, the millions that she spent on making it materialize I realize that one problem lay in the fact that it was all about the WEDDING and never about the MARRIAGE. In fact, I even remember her once saying wistfully, “If only there was a way to have a dream wedding without having to go home with a husband afterwards!” Reflecting over her mindset, it’s obvious that she had never even thought beyond the wedding and honeymoon, let alone actually being prepared to shoulder the responsibilities and demands that come with married life.

A wedding is just a single function, lasting a few hours, and is forgotten shortly thereafter. A marriage, however, is meant to endure and prosper for a lifetime. How is it that we then prepare for the wedding as if it’s going to last forever and completely neglect preparing for marriage?

Most girls dream about or they at least want their ‘big day’ to be something special, an occasion to be fondly remembered. Sadly, what they don’t realize is that the only giver of true happiness is Allah Ta‘ala and He grants this happiness to those who follow the sunnah of Rasulullah (sallallahu ‘alaihi wasallam). How can our wedding and marriage ever become a means of perpetual happiness and prosperity when we have removed the Giver of happiness and prosperity and the sunnah from the equation and filled our functions with haraam? Is the wastage, ostentation and other sins we indulge in for the sake of pleasing people and ensuring that our function makes an impression in society really worth the price we pay in sacrificed barakah and blessing which we need to last us a lifetime?

Remember, you will never find prosperity and happiness in haraam. Invest in the happiness of Allah Ta‘ala and you will reap returns in both this world and the next.

Click here for a detailed lecture on this topic.

Clarification on the status of Laylatul Mi’raaj