Multinational and well-known brands such as Huawei have been implicated in developing technology to identify Uyghurs through the use of facial recognition technology.[1]

Uyghur face detection (UFD) technology can identify if an individual in a video or image is Uyghur through the examination of their facial features. The technology allows the automation of massive state surveillance and is “potentially ushering in a new era of automated racism”.

One such example of this phenomenon can be found in Dahua Technologies, which integrated UFD software into police operating systems, thereby allowing “real time Uyghur warning” functionality. A practical example of the danger of this technology is that if a Uyghur was identified in an area designated to be ‘Uyghur free’, a warning would be sent to the local police to intercept and investigate the Uyghur in question – irrespective of whether or not the individual had committed an offence or not.

Another example of a multinational corporation using such invasive software to discriminate is Alibaba, the world’s largest e-commerce company. Alibaba is a behemoth of an online company with many lucrative business interests. Its key ventures include Alipay, which is the Chinese equivalent of Paypal, as well as Taobao.com, which is China’s largest shopping website.

Alibaba also operates China’s largest cloud services. Its API guide confirms “Is [the face] Uyghur?” as being one of several ‘face attributes’ amenable to detection. This automated functionality can be used to detect Uyghur faces online in images or videos. It can even flag the content for review, thereby increasing the capacity of the Chinese state to moderate and censor online activity.

Privately owned Chinese firms such as Baidu, known as the ‘Google of China’, have also been accused of assisting the state in the monitoring and censorship of its citizens. In 2019, Baidu filed a patent application, which included “ethnicity” recognition among its artificial intelligence functionalities. “Ethnicity” is understood to be shorthand for “Uyghur”.

Huawei is an internationally recognised brand with a strong presence in the United Kingdom. In 2018 it partnered with Megvii, one of China’s largest facial recognition companies, to test and validate “Uyghur alarms”.

According to Conor Healy of IVPM, Huawei had initially stated that such software was not intended for ‘real world use’. However, sceptics have pointed out that such software requires significant funding and time to develop. Thus, it would be strange for a commercial entity to invest so much without a real-world application intention. Furthermore, that same year Huawei – together with a research arm of the Chinese government – applied for a patent for the technology, adding further incredulity to its position.

Mr Healy of IVPM also gave witness testimony on Sunday at the Uyghur People’s Tribunal. He spoke of software which could interpret an individual’s emotional state from its physical manifestation. He cast doubt on the efficacy of such software, but warned that its limitation and unreliability could well make it more problematic as the user would likely assume the AI assessment to be accurate.

Tiandy is one of China’s largest surveillance companies and exports to over 60 countries worldwide. Tiandy’s own website claims that its cameras have the ability to detect ethnicity. In 2020, it was claimed that its cameras could identify “race”, with possible results returning as “yellow”, “black”, “white”, and “the Uyghurs”. 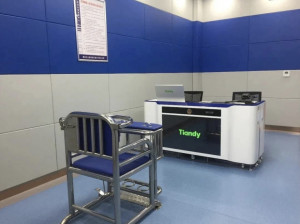 In addition to facial recognition, the Chinese authority is also digitalising physical forms of torture. In 2015 Human Rights Watch reported that ‘tiger chairs’ are often used by the Chinese authorities for the purpose of torture. It seems these ‘tiger chairs’ have now been made ‘smart’, but it is unclear what additional functionality they have. What is known, however, is that detainees are strapped into these metal chairs with their wrists and ankles restrained and made to remain there for hours, or even days. The resultant immobilisation and deprivation of sleep is considered a form of torture. Some have speculated that the so called ‘smart tiger chairs’ are a precursor to automated or remote torture.

In February of this year, Thomson Reuters exclusively revealed that half of London’s boroughs have bought and used Chinese made surveillance systems linked to Uyghur abuse. It found that 16 London Councils had technology made by Hikvision or Dahua.[2]

Hikvision has a significant presence in Xinjiang, where it has been contracted to build and operate multiple large surveillance projects. One of these projects amounts to about 50 million dollars, where the firm provides the technology needed to monitor ‘re-education’ centres and the 967 mosques in the locality. 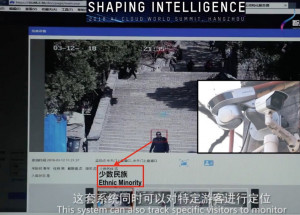 Furthermore, the mosques in the region had video conference systems installed to allow a state sanctioned and centrally delivered sermon.

With China being the world’s largest exporter of surveillance software and equipment, it is perhaps only a matter of time before we see such software in the hands of a totalitarian regime near us, or even closer to home. The only difference will be the intended target. The functionality of the current technology is to identify Uyghurs, interpret their emotional state, and predict their behaviour using AI. These methods and instruments may be purchased by other states to target another minority community of interest to that regime.