Home | *Blog | Committed to the Comfort of his Mother

Committed to the Comfort of his Mother 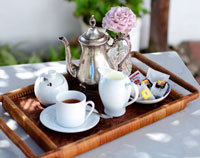 Sayyiduna Haarithah bin Nu’maan (radhiyallahu ‘anhu) was an eminent Ansaari Sahaabi of Nabi (sallallahu ‘alaihi wasallam) who had fought in the Battle of Badr. From all the virtues of this Sahaabi, it was the love, respect and selflessness with which he served his mother, Ja’dah (radhiyallahu ‘anha), that stood out the most.

It was this quality, of serving his mother with complete love, respect and consideration, that earned this Sahaabi (radhiyallahu ‘anhu) the rank where Rasulullah (sallallahu ‘alaihi wasallam) himself heard him reciting the Quraan in Jannah.

Obedience and service to parents is a path to Jannah that is often overlooked. However, seeing to their comfort, fulfilling their needs and showing them the love and respect that they deserve is a great ‘ibaadah that earns one tremendous rewards in this world and the next. Furthermore, if we make their hearts happy, they will give us their heartfelt du‘aas which will assist us in both worlds. On the contrary, neglecting our parents and hurting their hearts is a severe sin that will deprive us of goodness, happiness and blessings in our lives. It is nevertheless important to remember that if one’s parents demand that one should do something contrary to the sharee‘ah. One must respectfully refrain from such actions. Obedience to Allah Ta‘ala is the first priority.

Share
Previous The Harm of Arguing
Next  Simple Steps to a Healthier, Happier You!