Egypt Rises from its Slumber

From Cairo to Alexandria to Suez, what was thought ‘impossible’ has been done by a people who were seen as ‘futile’ and ‘hopeless’. Thousands of Egyptians took to the streets demanding the ousting of Egypt’s despot and coup leader, Abdel Fattah el-Sisi. Demonstrators chanted slogans such as “the people demand the fall of the regime”, “leave Sisi,” and “rise up, fear not, Sisi must go.”[1] Protestors gathered in and around Tahrir Square, with unprecedented scenes of the tyrant’s posters ripped up and stomped on.[2]

Those who said that the revolution of the 25th of September was a failure and that the usurping of our respected president Dr. Mohamed Morsi (may Allāh have mercy on him) was inevitable: it is time now to respond. Every successful venture will encounter hard failures and roadblocks before it can succeed, but every one of those failures teaches us something. The Egyptian people have learnt many lessons in their pursuit of freedom. Most importantly, they opened the door to allow themselves the possibility of taking their governance into their own hands.

When the oppressor established his rule, he assumed he was taking control of the same subjugated people as before. But the reality was different. It took six years, a coup, a massacre of pro-democracy protestors, thousands of extra-judicial assassinations, and more than 60,000 political prisoners to wake the Egyptian giant. The people who tasted the sweet tonic of self-governance have loathed returning back to the old ways. This, together with an untenable economic situation and a consistent narrative of imprisonment, torture, and murder, makes sure that the strong-arm dictator is only living on borrowed time.

The spark of the 20th of September has been largely credited to Mohammed Ali, a building contractor and actor who launched a daring video campaign, divulging his first-hand account of the rampant corruption that we had known was taking place. Whilst corruption has always been assumed, the sheer scale and scathing truth revealed by Ali was frightening.

As he mentions in his videos, whilst Sisi was demanding the Egyptian people accept the reality of poverty without complaint – suggesting Egyptians to limit their children to two[3] and repeatedly pleading that “we are extremely poor”[4] – he went on to build an ‘Eid resort’ palace worth more than 250 million Egyptian pounds (more than £12 million). This was just one of the many extravagant displays that Sisi had spent on himself and his friends, adding that his wife, Entissar Amer, unhappy at the décor of their lavish personal residence, requested structural and decorative changes worth more than 25 million Egyptian pounds. [5] [6] [7] All the while, old Egyptian women are eating out of rubbish bins[8] whilst systematic poverty, corruption, and governmental incompetence in the Land of the Nile has forced up to one million of Cairo’s 18 million residents to live in graveyards.[9]

More ridiculous than this rampant corruption, Sisi went on to admit that he had indeed paid these exorbitant sums. Then, childishly and unbelievably, Sisi continued to say that, despite his closest aides “kissing his hands not to reply” to Mohammed Ali, these palaces were built in the national interest.[10]

Let us not deceive ourselves. Although this whistle-blower has been useful in lighting a fire against Sisi, he freely admits that he has been working with this corrupt government and profiting substantially from their contracts. The only reason for Ali exposing Sisi has been because vast sums of money have been withheld from him, forcing him to flee the country for his safety and start this video campaign. The reality is that Mohammad Ali is the ‘straw that broke the camel’s back’.

If anything, he proved that the only thing that was holding back national widescale resentment of the coup regime and its systematic failures was fear of death or persecution. Anyone who opposed Sisi was killed, disappeared, or incarcerated and accused of being a member of the Muslim Brotherhood. Sisi’s most vocal opponents have been mostly extradited, persecuted, or wanted dead or alive, and have since operated from London to Istanbul with enormous impact.[11] [12] The belief that opposition to the coup is commonplace but subdued by fear was behind the exceptionally successful hashtag “rest assured, you are not alone.”[13] The genius of this initiative not only routinised and united opposition to the tyrant, it also allowed opponents inside Egypt to reveal their sentiments anonymously and inconspicuously through graffiti, flyers, and other creative ways.

Although Sisi nearly won through fear, Mohammad Ali rode on ripe Egyptian sentiments, scrupulously synchronising his call to hit the streets with a football match and on a Friday, where people would already be on the streets. The results were unexpectedly successful, and could very well lead to the removal of the ‘Pharaoh’.

Whichever way it goes, we should glorify and thank Allāh who has instilled in the Muslims renewed resolve. No longer should we agree again to live under perpetual oppression whilst being content with our lack of progress, or even worse, relapse, as Egypt did when it failed President Morsi.

Those who are hitting the streets again know with absolute conviction what opposing this regime means. The despot has consistently demonstrated his brutality in all of his time in office, starting with the August 2013 Rabaa massacre and most recently in the slow murder of the usurped president by cruelly denying him access to medical care.[14] The protestors are under no illusions about how he will react, yet they are choosing to persist, which is the greatest sacrifice.

Those of us who cannot join them physically must attach our hearts to this struggle. We need to see it transcending the borders of Egypt. Egypt is a standalone, mighty state with a substantial past. You need not look beyond the scurried and panicked coverage on Zionist television, flustered by the protests and rattled by the prospect of losing their playmate. Palestine’s future is inseparably tied to Egypt, as is that of Islam in the Middle East. Our physical support will be in the night prayer and consistent begging of Allāh to grant our brothers and sisters in Egypt victory, and to purify both our and their intentions. Let our pursuit be for the Hereafter, and let our struggle in this world be for the sake of the ultimate victory.

“The leader of the martyrs is Hamzah ibn ‘Abd al-Muttalib and a man who stood up before a tyrant and enjoined good and forbade evil, and he killed him.”[15]

Clashes take place in Suez as protests continue against el-Sisi

Thousands of Egyptians have taken to the streets in a rare show of public disapproval towards the coup president Abdel Fattah el-Sisi. The protests, mostly led by young people, are reported to have taken place in at least eight cities, with Cairo, Alexandria, and Suez heading the largest crowds. [1] 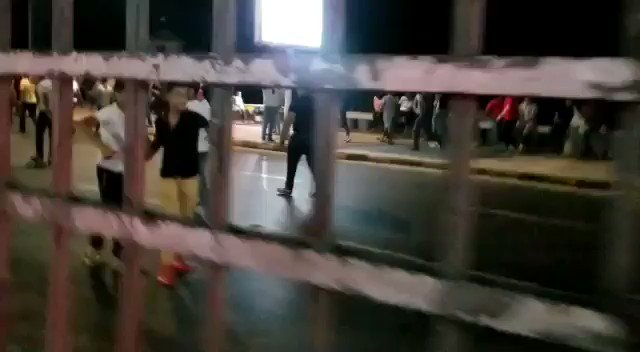 4,758 people are talking about this

According to several media reports, security forces in Egypt clashed with hundreds of protesters in the port city of Suez. Security forces fired tear gas and live rounds in an attempt to disperse the large crowds. [2]

Security forces in Suez, historically a bastion of resistance in #Egypt forcibly disperse pro-democracy protesters in the centre of the city. 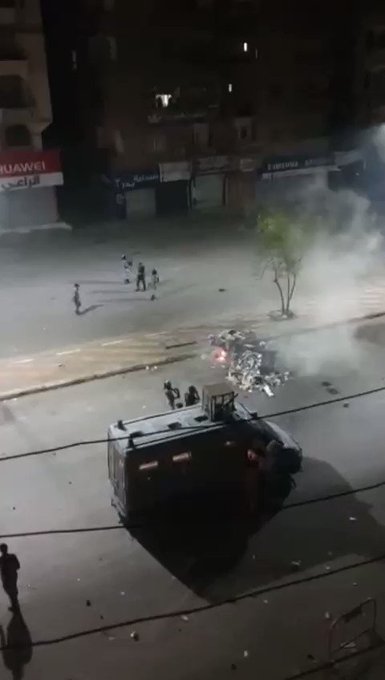 The unrest on Saturday came just one day after thousands of people took to the streets in several cities across the country demanding that el-Sisi resign. The rare show of dissent against the coup president is significant, since the Sisi regime has cracked down on dissent, jailing thousands and banning protests across the country.

On Friday, demonstrators gathered in Cairo’s Tahrir Square chanting “the people demand the fall of the regime” and “leave Sisi.” These slogans echo the chants that were called in the exact same place that took down longtime dictator Hosni Mubarak more than eight years ago.

Meanwhile, Sisi headed to America to attend the United Nations General Assembly (UNGA). “Rise up, fear not, Sisi must go” was echoed in the streets of Alexandria, while in the port city of Damietta, a large poster of the former general-turned-president was torn down. 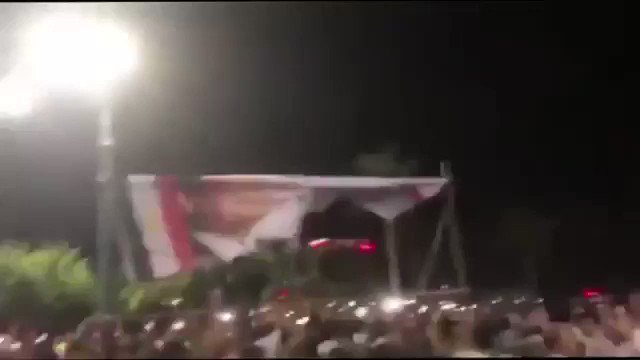 The coup president is responsible for massacres through his illegal coup and his military war waged fully on the Egyptian populace. Sisi’s forces bloodily purged the two squares, Rabaa al-Adawiya and al-Nahda, where thousands of people were massacred and their corpses burnt.

Tens of thousands of innocent protestors had gathered in the two squares supporting their first elected president, Mohamed Morsi, knowing it would be overlooked by the scorching anti-Islamic sentiment conjured throughout Morsi’s short term in office. The massacre in Rabaa al-Adawiya Square was the bloodiest mass killing of unarmed civilians in Egypt’s recent history, and indeed the world.

According to the executive director of Human Rights Watch, Kenneth Roth, Sisi’s forces “carried out one of the world’s largest killings of demonstrators in a single day in recent history.” [3]

Members of the Egyptian army, loyal to the illegal coup ringleader Abdel Fattah el-Sisi, are also responsible for exterminating unarmed civilians in Sinai. In April 2017, Amnesty International documented several of the Egyptian army’s extra-judicial field executions in North Sinai. [4] These documented executions are thought to be only a glimpse into the bleak collection of criminality with impunity by soldiers of this ruthless regime, under the guise of ‘fighting terrorism’. [5]

Around 200 people in Suez marched to the city’s downtown area for the second night in a row, according to the AFP news agency. The demonstrators were met by Egyptian security forces and armoured vehicles. One protester told AFP:

“They [security forces] fired tear gas, rubber and live bullets and there were injuries.”

“My nose started burning up. The smell was seeping through the balcony. I also saw some youth run and hide in our street” 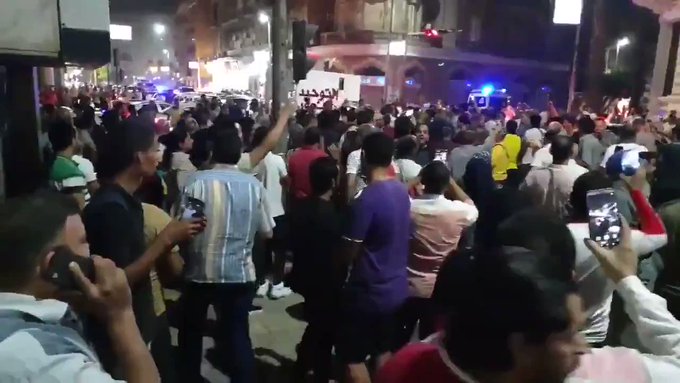 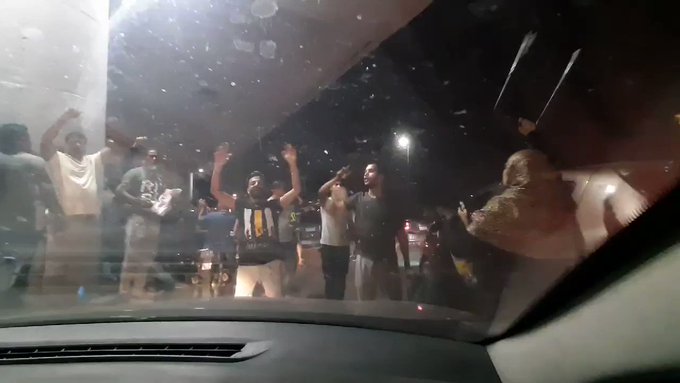 234 people are talking about this

Protests have also reportedly taken place in Giza and in the northern town of Mahalla. However, a strong military presence was sustained in Cairo’s Tahrir Square, known as the epicentre of Egypt’s 2011 revolution and responsible for the removal of former president Hosni Mubarak.

Posted by: Shaheer Choudhury Israeli citizen Shahar Perets had never dreamt that she would mark …

Posted by: Shaheer Choudhury In utterly horrendous findings, a new report has unveiled the true extent …