Home | *Blog | I’ll Cross the Bridge when I Get there! 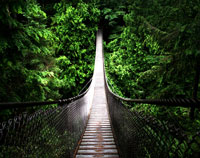 A few months back, the media carried the story of a ‘Muslim’ woman who was the new 100m women’s champion. The article also quoted her saying that she is working on improving on her times for future races.

I’m pretty sure that every Muslimah who values the dignity and honour of being gifted with the beautiful and noble deen of Islam, doesn’t require an explanation on the impermissibility of such an act. A Muslim woman throwing aside her modesty and shame for the sake of a measly medal and some cheap fame is indeed contemptible. However, the point to take note of is that: An “outstanding performance” demands intense training and preparation.

In the case of an athlete, it would perhaps require dieting, controlled hydration, sleeping eight to ten hours a day, strenuous training for a minimum of twenty hours a week, preparing psychologically, consulting a nutritionist, exercise physiologist, sports medicine specialist, a coach, and much more…

In the same vein there are certain things in life which require intense training and extraordinary preparation in order to achieve an “outstanding performance”.

When the topic of parenting and motherhood is broached, the typical response of many a teenager is:

“Agh! Who cares about that? I’m only gonna marry at 24 and get my first child maybe at 29 and my second at 33. That I think would be more than enough for me. The day I get to that bridge, I’ll cross it.”

Remember! All bridges and flyovers in life are not the same. While some bridges do not require planning to be easily crossed, there are many others that are quite challenging and demand thorough preparation. If we leap in blindly, not only will we be hitting a rocky road, rather we’ll also face the peril of plunging to a pitiable end.

Imagine an Olympic champion, not training for the entire year, waking up a few minutes before the race, rushing to the stadium with a “Red-Bull” in his hand and expecting to win the championship for a second time. We’ll call him “nuts” “crazy” and “goofy”. Isn’t it?

The question we need to pose to ourselves is:

“Are we not perhaps ‘nuttier’, ‘crazier’ and ‘goofier’ by wishfully thinking that we can qualify as champions in life’s ‘major race’ of ‘motherhood’ and ‘rearing the leaders’ of tomorrow without any preparation?”

“So… well… are you trying to tell me that I must start changing nappies and clean up vomit from now?” would be the next question.

Not at all! Those are the bridges that you would be able to cross when you get there.

“Then what other preparation needs to be made for motherhood? Do you perhaps mean that I should start shopping for some baby-growers, nappy bags and other essentials to lessen the financial burden on my hubby-to-be?”

No! It’s much simpler than that – Just be the person you want your child to be!

You obviously don’t want the day to come when you’ll have to tell your teenage daughter:

“Darling! I don’t like you hanging around with friends in the mall on a Saturday night.”

Then she snaps back:

“But mummy … you also spend every Wednesday afternoon at the coffee shop in the same mall with your friends, Aunty Nasreen and Shireen.”

As the mother, you go on to advise her not to mix with boys at the beach front on a Sunday afternoon.

To this, she rudely fires back:

“Mummy! Aren’t there men watching you, when you work out in the gym twice a week?”

“But, Mum I saw a picture of you posing with my friend, Tasneem’s daddy at your matric party. ‘Don’t rain on my parade!’ ‘Don’t tell me how to live!’You had your ‘fun’, now it’s my turn.”

If this sounds embarrassing, try to imagine the embarrassment and humiliation we would be drowning in on the Day of Qiyaamah when the complete detailed ‘movie’ of our lives would be played in front of our parents, grand-parents, children, grand-children, and the entire world, especially our Beloved Nabi, Muhammad (sallallahu ‘alaihi wasallam). Isn’t he, who tolerated the divorce of his pure daughters, the martyrdom of his respected uncle, the shedding of his precious tears and the spilling of his priceless blood… all for our sake?

Chill… the game’s not over yet… you still have a chance… Just become the person you’d like your child to be!

History testifies to the justice of the 2nd ‘Umar, also regarded by some as the 5th Caliph of Islam, ‘Umar bin Abdul ‘Azeez (rahimahullah). What was the secret ingredient that helped produce this great and gentle-giant of a leader?

One night while Ameerul Mu’mineen, ‘Umar bin Khattab (radhiyallahu ‘anhu) was patrolling the streets of Madeenah Munawwarah, he leaned against a wall and overheard a remarkable conversation between a young girl and her mother.

The mother was instructing her daughter to add water to the milk that was to be sold the next day in order to increase the volume. The girl replied:

“O my mother! Aren’t you aware of the law that Ameerul Mu’mineen has passed today, that water should not be added to milk as this tantamounts to deception?”

“O my daughter! Where can ‘Umar see you? Just do as I’m saying” said the mother.

The daughter declared: “O my beloved mother! I cannot be so ‘two-faced’ as to obey him in public and disobey him in private. It may be that ‘Umar cannot see, but definitely the Rabb (Lord) of ‘Umar is watching!”

‘Umar (radhiyallahu ‘anhu), as great as he was, was ‘blown away’ by these sentiments which emanated from a heart that was brimming with the awareness and consciousness of Allah Ta‘ala.

The next morning, after making inquires about the family, ‘Umar (radhiyallahu ‘anhu) called his sons and said:

“If your father had a need for marriage he would have been the first to marry this girl. Which of you requires a wife? I foresee this girl giving birth to a warrior who will lead the Arabs.”

His son ‘Aasim (radhiyallahu ‘anhu) responded: “I don’t have a wife. Arrange that I be married to her.”

This wasn’t a case of “crossing the bridge when we get there”. The production of this illustrious personality was the culmination of the effort of two lengthy and eventful generations.

How apt is the beautiful saying that the nurturing of a child begins the day the mother of that child is born. The nurturing of ‘Umar bin Abdul ‘Azeez (rahimahullah) began the day his mother was born! Indeed, her nurturing was undertaken with piety and Allah-consciousness. And, yes, she was an epitome of the love, recognition and nearness to Allah Ta‘ala from a young and tender age.

So if we desire our children to be the ‘leaders’ of tomorrow, productive for themselves and a blessing to others, we need to start preparing from now. The piety of the mother sows the seeds for the piety of the child who will in turn raise true servants of Allah Ta‘ala.

Another significant lesson that shines out from this incident is that when a young girl lives a life of piety and obedience to Allah Ta‘ala, He will bless her with a good home and a bright future.

The “girl” in this incident had no father. She and her mother ‘battled’ to make ends meet by selling milk. She was not of a very high social standing, yet she received a proposal from the ‘prince’, apart from the fact that the ‘king’ himself would have married her, had he needed to.

Even if we don’t live to cross these bridges, there is another bridge which we will inevitably face one day. It is thinner than a strand of hair and sharper than a sword… suspended over the blazing fire of Jahannam.

Insha-Allah preparing in this manner to cross these worldly bridges will enable us to cross that bridge at a speed, faster than that of lightning, securing us entry into the gardens of bliss forever and ever and ever…