It’s Under Your Nose! 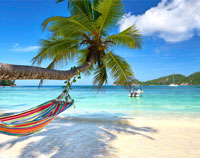 There was once a multi-millionaire businessman who journeyed to a tropical island to enjoy a vacation. One morning, he set out from his chalet, bright and early, to walk on the beach and enjoy the morning air. As he strolled, he caught sight of a local fisherman, hard at work in a small boat, pulling fish out of the water.

A few hours later, at approximately 10am, when the businessman was walking on the beach once again, he was surprised to find the fisherman relaxing in a hammock! “How can this man be so lazy?” he wondered. “He only worked for a few hours, and now he’s already resting!” he thought to himself. With these thoughts in mind, he approached the fisherman.

When he reached the fisherman, he greeted him, asked him how he was and made small talk for a few minutes. Thereafter, he asked him, “Why do you work so little? How many fish did you catch today?” The fisherman replied, “I require five fish to feed my family, and five fish to sell. By selling these five fish every day, I earn sufficient money to fulfil my needs.” The businessman then said to him, “If you catch ten fish in a few hours, then by fishing for the entire day, you would be able to earn much more!”

The fisherman asked him in interest, “What would I then do?” The businessman replied, “After saving sufficient money, you would be able to buy a bigger boat and employ a crew to fish with you. Then you would catch even more fish and make even more money!” “And then what?” the fisherman enquired. “Let me explain the whole plan to you!” the businessman exclaimed, clearly in his element.

He then elaborated, “After you have a boat and crew, you fish for a few more years, saving your money, until you can own an entire fleet of fishing boats! Then, when your fleet earns enough money, you can buy a trawler. Ultimately, perhaps after fifteen to twenty years or so, you should possess your own fleet of trawlers and your own fish processing plant, exporting fish around the world!”

The fisherman was, by now, quite intrigued. “And then what?” he asked. The businessman replied, “And then, my friend, you retire and relax on the beach!” Hearing this, the fisherman responded, “But… I’m already relaxing on the beach!”

This parable, as simple as it may be, conveys a profound lesson that relates to almost all of us. The lesson is that of “Contentment”.

A Muslim must understand and believe that wealth and all the things of the world are only a means to an end – they are not the goal or purpose of life. The goal of life is to prepare for the Hereafter. Hence, for example, if we enjoy a good night’s sleep on a R150 pillow, why do we need to spend R3000 on a pillow? Why do we lack contentment with that which we already have and enjoy?

If a person has the wealth of contentment, he will not pine for an exotic overseas holiday, as he knows that what he seeks is under his own nose. He will find enjoyment in eating the food at home, he will have fun and relax at home, he will sleep well at home, and in short, find happiness at home. However, if he lacks contentment, then he can roam the entire earth and stay in every resort the world has to offer, but he will NEVER find satisfaction and happiness.

Remember, the person who is truly rich is he who cherishes what he has, not chases behind that which he doesn’t have.

Kindness in the Face of Difficulty

Every Cloud has a Silver Lining

Zina (Adultery/Fornication) Becoming Widespread Is One Cause Of Plagues