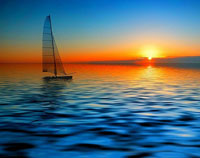 The king of Sindh, Mirza Husain gave his daughter in marriage to Kamran Mirza, the son of the first Mughal emperor, Babar. When Babar passed away, Kamran tried to overthrow his brother Humayun. Eventually Humayun conquered Kamran and had him blinded.

Before leaving for Hijaaz to live in exile, Kamran Mirza went to Sindh by his father in law Shah Husain. Shah Husain discouraged him from undertaking such a journey. However, Kamran replied that him remaining behind would be difficult and of no use. Shah Husain’s daughter also got ready to travel with her husband to Hijaaz. Her father and other relatives tried very hard to explain to her that she was ruining her life by accompanying her husband, but she did not listen and remained firm on her decision, until she finally boarded the ship.

The father tried for the last time by sending someone to persuade her but she refused. Eventually he himself went up to her. The loyal wife told her father: “When Mirza was a king and in prosperity, you gave me over to him. Now when he is broken down, blind and afflicted with calamites to the extent that there is no one to console his broken heart, you wish to separate me from him, whereas he is my husband. Which country’s constitution and which nation’s loyalty is this?”

The father’s heart was overwhelmed with his daughter’s words of loyalty and his eyes swelled with tears. He gave them lots of wealth and riches and bid farewell to his daughter with a lot of grief and sorrow. (Baland Hoslah Khawaateen pg. 50)

Lesson: Loyalty in a relationship is not to be seen when everything is smooth sailing, rather true loyalty is when a wife remains with her husband even when he loses all his wealth and health, as was the case with the wife of Sayyiduna Ayyoob (‘alaihis salaam) as well.