Remembering Rabaa: the Consequence of the War of Words

A day similar to this, in 2013, marks the massacre we must not forget. It was a day when the Egyptian Military bloodily purged the two squares, Rabaa al-Adawiya and al-Nahda, of tens of thousands of innocent protestors supporting their first elected President, Mohammad Morsi, knowing it would be overlooked by the scorching anti-Islamic sentiment conjured throughout Morsi’s short office. It was the bloodiest mass killing of unarmed civilians in Egypt’s recent history,[1] and indeed the world’s.

Also read: The Waged War on Islam in Egypt

Days before the massacre, Egypt’s menaces took to media platforms and fanaticised over a post-Morsi ‘enlightenment’. That he was an accomplished rocket scientist, Egypt’s first elected leader since before the Pharaohs, an astute politician, the lowest earning President in the world, a Qur’anic Hafidth and an emblem of democracy and had helped secure five successful national elections in his party’s favour were all undermined by the raging anti-Morsi campaign, flared by fanciful social media or outright malicious mouthpieces. It could not be borne that for once there would be an Egypt for the impoverished and a challenge to its crooks. Mobs of armed protestors who took to the streets torched the Brotherhood’s headquarters, killing and injuring scores while tens of thousands surrounded the Presidential Palace, many of whom were armed with shields, clubs, home-made handguns[2] and Molotov cocktails. Gathering in Tahrir square on the 30th of June 2013, it was time for the despot to make his move. On the 3rd of July, professing his commitment to ‘the people’, Abdel Fattah el-Sisi completed his coup.

Pro-legitimacy rallies flowed in every street after the 3rd of July coup, eventually pouring in the Rabaa al-Adawiya and al-Nahda squares of Cairo. These sit-in rallies were, however, characterised by strict civilian order, providing demonstrators with meals in Ramaḍān, full access to television, internet, an array of businesses and vendors, areas for prayer, segregation facilities, fully-fledged speaker and event programmes, organised security and play areas for children with bouncy castles and swimming pools.[3]

Unaffected by the demands but exasperated at the resilience of these sit-in protests, coup-government security officials commenced their bloody campaign. During the dawn prayer of the 8th July, the republican guards of the coup government opened head-directed fire with explosive ammunition at protestors as they were praying, killing 42 individuals and injuring around 500 others.[4] El-Sisi then requested that his supporters demonstrate on the 26th of July to provide “authorisation and an order” for security forces to practice ‘legitimate’ brutality against the protestors and force their dispersion.[5] The general did not step back to anticipate this authorisation or hope to get approval for what was to come, nor did he for once consider that those stationed in Rabaa al-Adawiya and al-Nahda were also ‘people’.

His cosmic arrogance and insistence on quelling a counter-movement that would doom his spiteful feat a failure pushed him to a second major massacre. The despot issued a 48-hour decree against the civilians in the two sit-ins, ludicrously before his petty supporters who were supposed to sanction the decree to massacre had even gathered.[6] Again in the hours of dawn, this time on the 27th of July, the 48-hour ultimatum elapsed and security forces stormed Rabaa al-Adawiya, enforcing a ‘shoot to kill’ policy, murdering more than 100 protestors and injuring scores. El-Sisi had escalated the situation from an illegal coup to a fully waged military war on the Egyptian populace. International response was, however, categorised by weakness and utter disdain. The British Foreign Ministry at the time curbed its condemnation to the words “now is the time for dialogue.”[7] 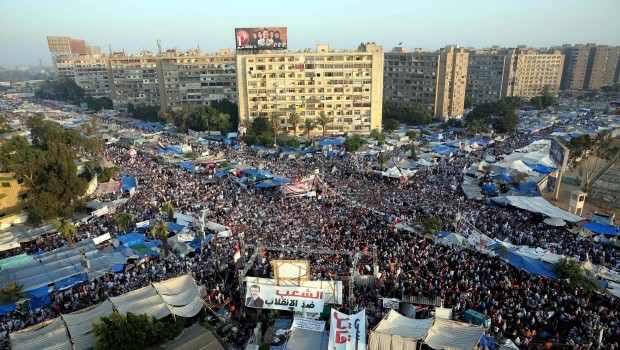 The Massacre of the 14th of August

When it became clear that his Pharaoh-like demeanour would only awaken enthusiasm and further defiance, Sisi and his coup government took their crimes to a level the world had not seen the likes of. Egyptian forces brutally stormed the two sites Rabaa and al-Nahda, assisted by bulldozers, snipers and helicopter fire, dispersing the two sit-ins with all that Sisi had in his depository. Hours on end of indiscriminate fire resulted in the murder of well over 3,000 protestors (some speak of 13,000 martyrs) and the injuring of a total innumerable.[8] Security forces set fire to the Rabaa makeshift hospital that still contained causalities who were being treated in order to destroy any remaining evidence.7 The successive “Day of Rage” in response to the Rabaa massacre turned into an evening of bloodshed with security forces continuing their onslaught onto Cairo’s Ramsis-Square, killing more than 100 civilians and forcing them to set up makeshift hospitals in Al-Fateh mosque.[9] Amidst a swarm of outlaws, security forces barraged the mosque with bursts of gun-fire and then stormed the mosque in defiance to all religious and international customs, severely beating those who had taken refuge inside.[10]

The 14th of August marks a year to the day of the massacres of Rabaa al-Adawiya and al-Nahda squares where many thousands of people were massacred and their corpses burnt.

“Egyptian Forces carried out one of the world’s largest killings of demonstrators in a single day in recent history.”

He further condemns the current regime in the most direct terms: “this wasn’t merely a case of excessive force or poor training. It was a violent crackdown planned at the highest levels of the Egyptian government. Many of the same officials are still in power in Egypt, and have a lot to answer for.”

And while Sisi’s end is impending, as is natural of a criminal of this scale, almost all voices of opposition have either been silenced by summary executions or imprisonment, legitimised by an “utterly corrupted justice system”, which is “little more than a handy tool for the authorities’ repression of any vestiges of opposition or criticism,” according to Magdalena Mughrabi-Talhami, Amnesty’s deputy director for the Middle East and North Africa.[11] 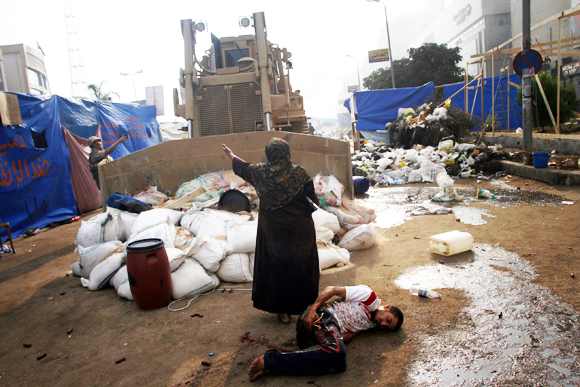 The Devastating Tongue in the build-up to every Coup

Egypt has yet to build its repertoire of military coups. Turkey, however, had lived through the disastrous consequences of military administration four times before it thwarted the fifth by the consensus of its people. In fact, nothing apart from absurd voices in the media can convince people that being ruled politically by an institution designed for war such as the military will produce a social or economic utopia. Anyone who has seen or heard the hogwash spewed on Egyptian television, such as the Muslim Brotherhood organisation that was born in 1928 apparently being responsible for the downfall of Andalusia Spain centuries ago,[12] can appreciate who aroused the hysterical pro-military narratives.[13]

The impact of the media on the movement of people need not be emphasised in this article. With the rise of social media, every one of us can actively prod a movement in a good or bad direction. The impact of our ‘tongues’, so to speak, has never been greater than it is in this era, and it can be argued that most struggles in the Middle East against repressive regimes were triggered and supported by social media to untold extents. Never should the impact of a word thrown in the social universe in support of good or in repelling evil be belittled.

The impetus behind Turkey’s coup attempt on the 15th of July 2016 and Egypt’s coup on the 14th of August 2013 are largely the same. Both were mainly spurred by their respective democratically elected governments being maligned for their Islamic values irrespective of their achievements, how they got to power or the quality of their leadership. Both were exacerbated by bad press and spurious claims, with every person in the world either a positive or negative contributor, and thus responsible for the outcome of the government’s survival or deposition in a way proportional to the contribution. In Turkey’s case, the bad press was overshadowed by an opposing reality, an illustrious administration and tangible achievements developed over 15 years. In Egypt’s case, achievements during Morsi’s year in office were overshadowed by Egypt’s wildly obeyed media. The Muslim Brotherhood’s tarnishing is to the extent that it has even influenced voices in Egypt’s opposition, often introducing their anti-Sisi remarks with: “I do not support the Muslim Brotherhood in the least, but…”

It is through this lens, the dreadful ramifications of a coup, that we now understand why Turkey shut down outlets that incited one such as Today’s Zaman by a court order in March 2016. It had nothing to do with blocking ‘Freedom of Press’, as those who wanted the coup in Turkey to succeed, would have us believe.

When a Muslim sees a good government, like the AK Party, he or she should not smear it publicly, even if there be minor elements or concessions we disagree with. There are ways to go about change without stimulating insurgency. Let us ask ourselves, what is the alternative and are we willing to be partly responsible for the alternative? Allāh has shown us the alternative starkly, it is Egypt, at least 40,000 political detainees,[14] thousands sentenced to death, closure orders for 27,000 mosques,[15] poverty, recession, complicity with Israel and on goes the list. Beware of that word that assists in overthrowing a good government.

“Verily a person utters a word, that he deems harmless, but it results in his falling into the depths of the Hellfire.”[16]

[13] We have spoken about this extensively in Islam21c’s three-part series called: ‘The Waged War on Islam in Egypt’. Please refer to this for more information and references.