The Sajdah of a Woman 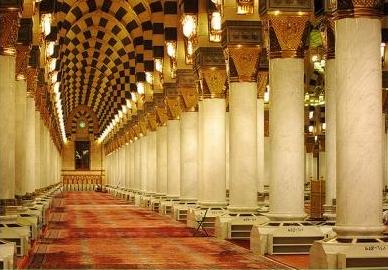 When making salaah in the Haramain, the Arab women insist on correcting our sadjah posture, (making it like that of men). They keep screaming at us saying haraam, haraam.

How should we react, should we change our posture, as we cannot communicate with them?

This is a common problem which many women encounter during their visit to the Haramain Shareefain. Hence we will discuss the issue in somewhat detail.

Distinct Rules for Men and Women

It is an undisputed fact, that the physical composition of women is different to that of men. The sharee’ah has taken this into consideration and thus ordained distinct rulings for men and women in many important aspects of deen. The underlying factor in the distinct rulings for women is that they have been commanded to do everything in a manner that is more concealing for them. This rule has been taken into consideration in haj, jihaad, and even in salaah. Hence, we observe that attending the jumu’ah salaah is fardh upon men but not on women. The eid salaah is waajib on men but not on women. Calling out the azaan is an extremely meritorious act for men, however, impermissible for women. The reward for congregational salaah for men is twenty – seven times more than an individual salaah, whereas the more rewarding salaah of a woman is that which is performed in the inner most confines of her home.

The Salaah of Women is Different

This difference has also been considered in various postures of salaah. A woman is commanded to carry out her postures in a way that is least revealing and most concealing. Abdullah bin Umar (radiyallahu anhuma) says that the women during the era of Rasulullah (sallallahu alaihi wasallam) were instructed to gather their limbs as close as possible (in salaah). (Musnadul Imamil A’zam lil Haskafi – tarteebus Sindhi pg. 73, Sharhu Musnadi Imam Abi Haneefah lil Qaari pg. 191, Jaami’ul Masaaneed vol. 1 pg. 400) Allamah Zafar Ahmad Usmaani (rahimahullah) has classified it as saheeh (authentic). (I’laaus Sunan vol. 3 pg. 27)

Imam Baihaqi Shafi’ee (rahimahullah) – d. 458 A.H. – says: “The distinguishing factor between the laws of the salaah of males and females is that of concealment. A woman is commanded to do all those actions which are more concealing for herself.” (As Sunanul Kubraa vol. 2 pg. 222)

The posture of sajdah is no exception. The practice of almost the entire Ummah since the time of Rasulullah (sallallahu alaihi wasallam) till this day is that a woman will contract herself and keep herself close to the ground in the sajdah posture. This is evident from the ahaadeeth of Rasulullah (sallallahu alaihi wasallam), statements of the Sahaabah (radiyallahu anhum), verdicts of the Taabi’een (rahamihumullah), and mazaahib of the four Imams of fiqh which have been quoted below.

Imam Abu Dawood (rahimahullah) narrates with an authentic chain of narrators from Yazeed bin Abi Habeeb (rahimahullah) that Rasulullah (sallallahu alaihi wasallam) passed by two women who were performing salaah. He (sallallahu alaihi wasallam) said: “When you prostrate, let part of your body cling onto the ground, for women are unlike men in this regard.” (Maraaseelu Abi Dawood pg. 117 #87, As Sunanul Kubraa vol. 2 pg. 223).

1.Abdullah bin Umar (radiyallahu anhuma) narrates from Rasulullah (sallallahu alaihi wasallam): “When a woman sits in salaah, she should place one thigh over the other, and when she prostrates, she should press her stomach to her thighs in a manner that is most concealing for her. Indeed Allah Ta’ala looks at her, saying, ‘O my angels! I make you witness that I have forgiven her.’” (As Sunanul Kubraa vol. 2 pg. 223)

2.Abu Sa’eed Khudri (radiyallahu anhu) reports from Rasulullah (sallallahu alaihi wasallam): “The best row for men is the first, and the best row for women is the last.” He (sallallahu alaihi wasallam) would also command the men to spread out their limbs in sajdah whereas he would command the women to pull themselves together in sajdah . . . (As Sunanul Kubraa vol. 2 pg. 222)

Statements of the Sahaabah (radiyallahu anhum)

2.Abdullah bin Abbas (radiyallahu anhuma) was asked regarding the salaah of a woman. He replied: “She should pull herself together.” (Musannaf Ibni Abi Shaybah vol. 2 pg. 505 #2794 under the chapter “How will a woman prostrate?”)

Verdicts of the Taabi’een (rahamihumullah)

1.Ibraheem Nakha’ee (rahimahullah) – d 96 A.H. – says: “When a woman prostrates, she should bring her thighs together and press her stomach to them.” He also said: “When a woman prostrates, she should press her stomach against her thighs. She should not raise her posterior nor should she allow for any space or distance between the limbs of her body as a man does.” (Musannaf Ibni Abi Shaybah vol. 2 pg. 505 #2795 & #2798)

Mazaahib (Schools of Thought) of the Four Illustrious Imams of Fiqh

1.Hanafi: Abu Bakr Kaasaani Hanafi (rahimahullah) writes: “A woman should spread out her forearm on the ground, and lower herself without raising her body as a man does. She should also press her stomach against her thighs, as this is more concealing for her.” (Badaai’us Sanaai’ vol. 1 pg. 210)

2.Maaliki: Dusuqi Maaliki (rahimahullah) states: “It is preferable for a woman to contract herself in such a way that her stomach is joined to her thighs and her elbows are joined to her knees.” (Haashiyatud Dusuqi vol. 1 pg. 400)

3.Shaafi’ee: Khateeb Shirbeeni Shaafi’ee (rahimahullah) says: “A woman should pull herself together in ruku’ and sajdah in such a way that her stomach is attached to her thighs, as this is more concealing for her.” (Mughnil Muhtaaj vol. 1 pg. 401 – summarized)

4.Hambali: Ibnu Qudaamah Hambali (rahimahullah) writes: “The general principle is that the laws of salaah which apply to men apply to women as well. However, she differs with a man in this aspect that, she would not allow for any space or distance between the limbs of her body. Therefore, it is preferable for a woman to contract herself as this is more concealing for her.” (Al-Mughni vol. 2 pg. 258 – summarized)

All the above clearly indicate that the sajdah of a woman is different from that of a man, and that this distinction was first made by none other than Rasulullah (sallallahu alaihi wasallam) and then maintained by the prominent Sahaabah (radiyallahu anhum) and Taabi’een (rahimahumullah). Furthermore, there is universal agreement amongst the Imams of the four schools of thought, as can be seen from the above quotations.

Hence we conclude that this was the unbroken practice of the Ummah since the golden era of Rasulullah (sallallahu alaihi wasallam) up to this day. Therefore there is no need for the women to change their posture and resemble the sajdah of men. What they are practising on is 100% correct.

However one should not get into any argument with those who are calling this clearly established practice haraam. The Qur’aan Majeed describes the pious servants of Allah Ta’ala thus: “When the ignorant ones address them, they reply peacefully (avoiding trouble)” (Al-Furqaan, v63). Getting into arguments in the Haramain Shareefain is against the sanctity of these blessed places.

Checked and approved by: