The persistent, jarring sound of the alarm clock, rudely bringing an abrupt end to a sound, blissful sleep, is a sound dreaded by most. As much as a person may wish that he could go on sleeping indefinitely, everyone sets an alarm as they understand that the ‘wake-up call’ is essential for rousing them from their slumber.

Without the wake-up call, a child would be late for school and an adult for work, and this tardiness in keeping to time would have a ripple effect, causing far-reaching consequences that would create chaos in their lives.

As human beings, we have come to this world for the purpose of pleasing Allah Ta‘ala and earning entry into Jannah. Such is the fleeting, temporary nature of this world that it could be aptly resembled to a dream, while Jannah is the true reality and real abode of a believer. However, it often happens that we become mesmerized by the dream and lose focus of the Hereafter, due to which Allah Ta‘ala, out of His infinite mercy, sends us a ‘wake-up call’.

A car accident… a traumatizing robbery… a near-fatal bout of illness… the sudden death of a loved one… These are all ‘wake-up calls’ from Allah Ta‘ala, urging us to snap out of our state of negligence, open our eyes to the reality of death which is steadily approaching and value the gift of life by reforming our condition while we still have the chance.

With the month of Ramadhaan on our doorstep, we should look around us and ponder over the numerous people who were with us for the last Ramadhaan, but have sadly departed from this world and will never again be able to acquire the immense virtues of Ramadhaan. We should take heed from the funeral announcements that continued to pour in, day after day, and use this ‘wake-up call’ to turn a new leaf and change our lives.

In this regard, we must understand that the month of Ramadhaan is the ideal opportunity for us to use as the turning point in our lives, as Allah Ta‘ala has made all the conditions conducive for us to attain piety during this blessed month. The rebellious shayaateen are chained, the door of Jahannum is closed and the door of Jannah is opened, Muslims spend the day fasting and stand in Taraaweeh Salaah at night, due to awaking for sehri, most people engage in Tahajjud Salaah and the du‘aa of the fasting person is readily accepted by Allah Ta‘ala.

Indeed it is so easy for one to reform his life and gain the forgiveness of Allah Ta‘ala in this blessed month that it is only a person who is completely disinterested and has no inclination to reforming his ways who will squander this opportunity and ignore the wake-up call. On the contrary, if a person values Ramadhaan and spends it correctly, then he will not only earn unimaginable rewards but will also trigger a revolution in his life that will see him thereafter progressing on the path of piety.

On one occasion, two people came to Rasulullah (sallallahu ‘alaihi wasallam) and accepted Islam together. After some time, one of them went out in jihaad and passed away as a martyr, while the other passed away a normal death one year later.

Sayyiduna Talhah (radhiyallahu ‘anhu) saw a dream in which he was shown that the Sahaabi who had passed away a natural death had surpassed the one who had been martyred! The Sahaabah (radhiyallahu ‘anhum) expressed their surprise at this, to which Rasulullah (sallallahu ‘alaihi wasallam) replied, “Did he not live one more year after him? (Did he not) see another Ramadhaan in which he fasted? (Did he not) perform so-many more sajdahs (salaah)?” When the Sahaabah (radhiyallahu ‘anhum) replied in the affirmative, Rasulullah (sallallahu ‘alaihi wasallam) said, “The difference between them is greater than the distance between the sky and the earth!” (Sunan Ibni Maajah #3925)

When this is the value of just one Ramadhaan in a person’s life, then we should never allow this invaluable opportunity to slip through our fingers. We must realize that the upcoming Ramadhaan could possibly be our last. Thus, we must use it to reform our lives, please Allah Ta‘ala and earn our Jannah.

May Allah Ta‘ala soften our hearts to His reminders and bless us with His special friendship, aameen. 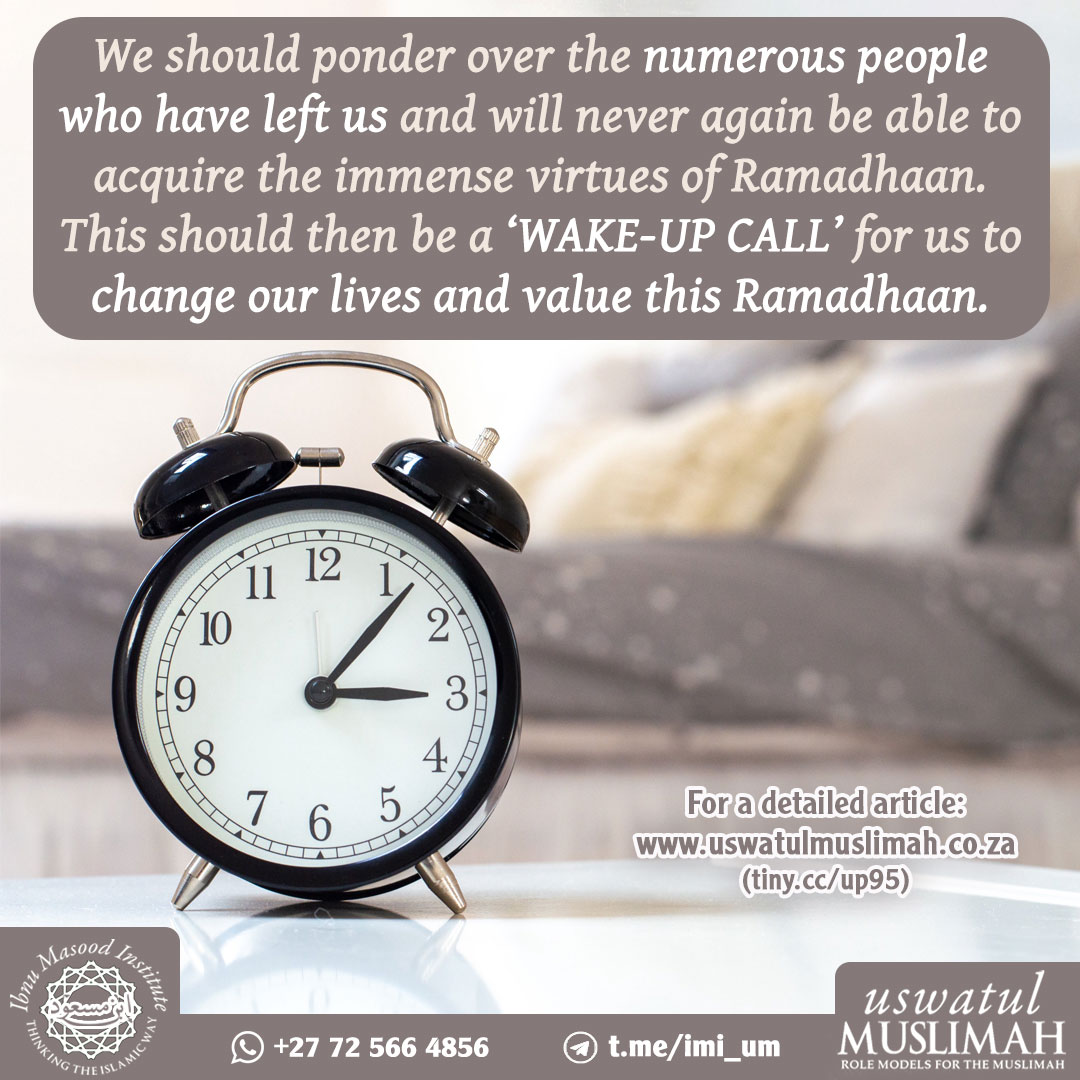