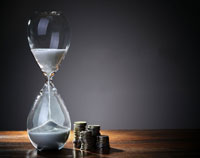 We live in a world of import and export, a world in which most goods and commodities are available in most countries for most of the year. However, despite the year-round availability, there are many goods that enjoy a ‘peak season’. Astute businessmen are those who identify this period and utilize it to their advantage.

The season presents a golden opportunity for one to secure tremendous profits in a minimal period of time. Hence, during the month of December, even if the rest of the world is on vacation, it is practically unimaginable for one to find the serious businessman on holiday. He understands the pivotal role that the season plays in his success; if he remains focused and committed, he will reap the profits, and if he allows himself to become distracted or while away his time, he alone will suffer the consequences.

The dynamic effect of the season is such that if the  shop owner, who struggles to make ends meet for the entire year, exerts himself and exhausts his efforts in this crucial period, he will not only recover his losses, but will even manage to turn a handsome profit .

The Season of Taqwa

Just as other things have a special season; taqwa also has a special season – the month of Ramadhaan. From fasting during the day to performing Taraaweeh during the night, the entire month has been specially designed to assist a believer in harvesting a bumper crop of fruit, from the tree of taqwa, that he will continue to enjoy long after the blessed month has expired. However, just as with other seasons, this will only be possible if one avails himself for this blessed month and expends all his energies in striving to secure the bargains it has on offer.

During Ramadhaan, the reward of every fardh act is multiplied seventy times, and for every nafl act carried out, one receives the reward of a fardh act. The Shayaateen are chained and announcements of mass forgiveness are made. Du‘aas are readily answered and on account of sehri, it is easy to perform Tahajjud Salaah. In short, this blessed season provides all the ingredients that will assist us to acquire the commodity that can neither be imported nor exported, nor sold for that matter, as it can only be acquired through each individual manufacturing his own – the priceless commodity of taqwa. However, this month is exactly that – a short period which will soon end. The window of opportunity is thus narrow, making time the greatest capital and asset that one could have.

If the shop owner arrives at work two hours late, he will regret the business that he lost and lament the money that he could have made. For every minute of the two hours, he could have been serving customers and turning the numbers. We often hear the adage ‘time is money’. However, contrary to popular belief, time is NOT money — it is far more valuable than money. Whereas money can always be later recovered if lost, time can never be recovered — and it is for this reason that time is our single greatest asset. In the race to secure the rewards of Ramadhaan, it is those who are particular regarding their time that profit the most.

In this regard, along with the ready-made opportunities to benefit are a host of ready-made distractions. After-Taraaweeh braais, meeting friends for a chat, an ‘Eid bargain-hunting’ excursion – these are all seemingly innocent activities. However, when thoroughly scrutinized, we realize that the braai ‘burnt’ two or three hours of our time, whereas a normal supper would have been concluded in a maximum of thirty minutes. The excursion to purchase ‘Eid-goods at the best prices may have saved us a few valuable rands but undoubtedly cost us invaluable hours and minutes. When time holds far more value than money, it is well worth spending more rands if it will result in us saving precious time. Even meeting friends can be detrimental as apart from killing our time with idle chit-chat, these gatherings often culminate in backbiting and other similar sins.

In the opinion of many, the uncrowned yet undisputed champion of ‘killing time’ is social media in all its various guises and forms. The magnetic effect of the smartphone transcends metal and hence it is the human eye that remains fixated to the screen. Whether in the musjid, or while attending a program for spiritual upliftment, or at the time of sehri when du‘aas are accepted – instead of maximizing and benefiting from these opportunities, there are many who become Media ‘Maniacs’ and while away the irrecoverable moments on their smart phones. Indeed, it appears as if the smart phone may have been named as such, since after it enters the hand of its user, it is the only one that seems to be ‘smart’. With even the West sounding the alarm over addiction to social media and the innumerable ills that accompany it, it is high time that we ‘switch off’ our phones and plug into the spiritual current of Ramadhaan instead of our power banks.

For this purpose, just as we fast by shunning food and drink from dawn to sunset, let us make a resolution to ‘fast’ from all forms of media for all the 24 hours of every day in the Month of Ramadhaan. Be it remaining abreast with the news, keeping up to date with Instagram or following on Facebook – we should initiate a complete ’fast’ from all these time-consumers during this blessed period and afterwards as well.

Thus let us make this Ramadhaan very profitable by correctly investing the capital of time that we have been blessed with. Insha-Allah we will reap the rewards in this world and the Hereafter.