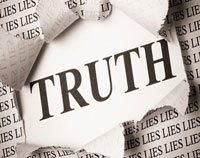 “LIAR!” – From all the accusations that could be leveled against a person, this is definitely among the worst. This word is not a mere accusation – it is a sword that slices through one’s integrity, honesty and truthfulness, leaving them no more. Once a person is branded a liar, people are reluctant to trust him and view him with suspicion. In short – he loses all honour and respect.

Lying is a very dangerous habit as it has a ‘snowball’ effect. If a person makes a snowball and rolls it down a hill, then as the snowball progresses downward, it gathers more snow, growing in size, until it becomes too big to control. Similarly, when a person speaks a lie, he sparks off a chain reaction. In order to cover-up for the first lie, he will be forced to speak a second lie, and then a third, and so on, until he is eventually caught and the entire chain of lies is revealed.

Throughout Islam and even before Nubuwwah (prophethood), Rasulullah (sallallahu ‘alaihi wasallam) was renowned for his qualities of truthfulness and honesty. It was for this reason that many people chose to keep their valuable belongings with him in trust. The Sahaabah (radhiyallahu ‘anhum), being the ardent followers and companions of Rasulullah (sallallahu ‘alaihi wasallam), maintained the highest level of truthfulness in their lives, and thus Muslims were a people who were once known for their honesty and truthfulness.

Truthfulness, in every facet of our lives (be it speech, actions or even our thinking), is something to strive for and is a quality that leads a person to Jannah. Rasulullah (sallallahu ‘alaihi wasallam) mentioned, “Indeed truthfulness leads to piety, and piety leads to Jannah. And a person continues to be truthful until he is recorded as a ‘Siddeeq’.” (Saheeh Bukhaari #6094)

The quality of truthfulness is one that is even cherished and prized by the disbelievers. Hence, when a Muslim is dishonest and deceitful, whether in the business place before an associate or at home before the domestic worker, he tarnishes the entire image of Islam. The disbelievers, instead of labeling the individual a liar, will often say, “Muslims” are dishonest people.

May Allah Ta‘ala assist us all in the endeavor to acquire truthfulness, in all facets of our lives, to the highest level – aameen.

Share
Previous Pleasant in Speech
Next Safety in Silence

Why do males inherit more than females?

Soulmates & Despondency in getting Married