It’s Me or Your Bread 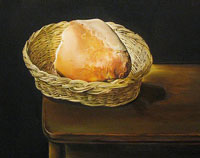 Shah Shujaa’ Kirmaani (rahimahullah) was a great monarch who abandoned his throne and kingdom in order to tread the path of gaining the proximity of Allah Ta‘ala. When he removed the royal crown from his head, Allah Ta‘ala crowned him with such honor that let alone kings and rulers – even the ‘Ulama and pious saints of his time honored and revered him and held him in high esteem.

It so happened that Shah Shujaa’ (rahimahullah) had a young daughter who was of marriageable age. He’d been searching for the ideal son-in-law for some time but had been unable to find a match who “made the grade”. His daughter had even received a proposal from another ruler but Shah Shujaa’ (rahimahullah) promptly turned it down. What he was looking for was a man who stood out for his piety and in that day and age; the quality of a person’s salaah spoke volumes about his piety.

The youngster now realized his good fortune and how great a bounty of Allah Ta‘ala this was. He turned to Allah Ta‘ala in gratitude thinking, “This is only through the bounty of Allah Ta‘ala. Where was I ever worthy of marrying the daughter of Shah Shujaa’?” Shah Shujaa’ (rahimahullah) performed the nikaah on the spot and then left to fetch his daughter. On arriving home, he covered her in a shawl and walked her to the home of her husband which they found to be dilapidated and bare of furniture.

The daughter entered the home, paused, and then turned to her father and complained, “Father! Where is this place you’ve chosen to dump me in?”When her husband heard this he could not contain himself and he too burst out saying, “See? I told you! I knew your daughter wouldn’t manage to live a life of simplicity!” The daughter of Shah Shujaa’ (rahimahullah) retorted, “What? Is that what you thought my complaint was? My father asked me if I was happy to marry a pious man who has the quality of abstinence, a man who has no love for things of the world- and that is what I consented to! My complaint is that you are not a man of abstinence. When I entered your home I saw a piece of dry bread kept on your water jar. How can a man of abstinence hold onto the food of this world?” Her husband was stunned by her answer and tried to apologize explaining, “I was fasting and only kept this dry bread so that I would have something with which to break my fast.” His wife determinedly replied, “My dear husband! When you rely on Allah Ta‘ala to reward you for your fast then why do you not rely on him to provide your iftaar as well? Choose either me or your bread, there isn’t space for both of us in this home.” He immediately gave the bread in charity and chose for the daughter of Shah Shujaa’ (rahimahullah) to remain with him. (Misaalee Khawaateen pg. 347 and Karaamaate Awliyaa pg. 159)

1. There is no better foundation for a blissful marriage than a pious spouse. Despite coming from a royal background, Shah Shujaa’ (rahimahullah) and his daughter chose for a pious youngster who had no material possessions. How wise and fortunate is the person who gives due consideration to piety when selecting a spouse, as piety shows its worth in this world and the next. Wealth sometimes goes as quickly as it comes and beauty is literally only “skin-deep”, all it takes is a small accident to irreversibly mar the once-beautiful features of the beloved. A marriage based on wealth and beauty alone is marred and vanishes just as easily.

2. Our seniors have great wisdom and foresight. Rather than opening a DIY kit and finding our own partner, we should trust them to find a suitable match for us. In this way we will secure their du‘aas – for which there is no substitute in gaining success – and we will secure ourselves a bright, happy future insha-Allah.

3. We are not required to empty our pantries of all the groceries nor our homes of all our comforts entirely. What we do need to do, however, is give up extravagance and ostentation (showing off) and bring simplicity into our lives.