Miraculous Cure of the Quraan Majeed 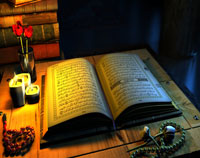 A woman named ‘Aaishah, from Pakistan, relates the following experience:

I was once busy reciting the Quraan Majeed, as was my habit, when my eldest son, Shafee’, who was approximately six years old at the time, emerged from the house to play outside. We are still unsure as to exactly how it happened, but he somehow closed the door of the car on his finger! His hand was injured so badly that his third finger was almost totally separated from his right hand. The finger just managed to remain attached to his hand by a thin strip of skin.

I was seated in our home, reciting Surah Ar-Rahmaan, and remained oblivious to what had transpired. My husband, on seeing our son injured, did not wait to inform me of what had happened but instead instantly bundled him into the car and raced off to the nearest doctor. On arriving at the doctor’s surgery, the doctor urged him to rush Shafee’ to the Civil Hospital.

I was just about completing Surah Ar-Rahmaan when the guard started urgently shouting for me. I did not turn my attention to him and indicated that he should wait as I wished to complete the surah before hearing his message. When I had completed reciting the surah, I turned to him and he informed me of the tragedy that had befallen my son. On receiving the news, I also set out for the Civil Hospital.

The doctors had used stitches to reattach his finger but felt that the finger would not successfully connect and join with the hand and it would thus be better to remove it altogether. I, however, could not tolerate the thought of my son living with only four fingers on his hand and begged them to give the finger a chance. In this way, two days passed with the finger attached, until the signs of infection and decay became apparent. The hand began to emit the odor of disease and we now feared that the infection had spread to the rest of his hand. In desperation, one of the most prominent surgeons of Karachi, Dr. Pinthu, was summoned.

When Dr. Pinthu examined my son’s hand, he supported the opinion of the other surgeons, claiming that my son’s finger was beyond saving, and also declared that the right hand would have to be amputated until the wrist on account of the infection. Overcome by a mother’s love for her child, I pleaded with Dr Pinthu to prescribe more medication which would hopefully remove the infection and save my son’s hand. Dr. Pinthu became angry and admonished me saying, “If you refuse to allow us to amputate until his wrist, the infection will spread! Within 24 hours, we will be forced to amputate until his elbow!”

Hearing this, I stood up and exited the hospital. I had turned to the best surgeons in the city and they had failed to save my son’s hand. I should rather turn to Allah Ta‘ala and place my reliance and faith in Him. Still standing outside the hospital, I began to make du‘aa to Allah Ta‘ala saying, “O Allah! This tragedy struck while I was reciting your Quraan Majeed! O Allah! You have complete control over the entire world and You are all powerful! Do not let me become despondent of Your mercy! O Allah, have mercy on my son! O Allah! I will recite one entire Quraan in the next day, You save my son!”

In order to console me, the Doctor gave me two capsules to give my son and a bottle of Dettol to disinfect his wound. The amputation, however, was scheduled to take place in 24 hours.

I turned my complete attention to Allah Ta‘ala and placed my complete confidence in Him alone for that 24 hours. I remained in the Hospital and began to recite the Quraan Majeed with my husband until we had together completed a khatam of the Quraan Majeed in 17 hours. In these 17 hours, the wounds on the hand of Shafee’ miraculously dried and all the signs of infection miraculously disappeared.

What all the doctors and surgeons combined were unable to accomplish, Allah Ta‘ala had done for us in just a few moments. The surgeons were speechless and realized that all their degrees were worthless before the Quraan Majeed of Allah Ta‘ala. This incident transpired 14 years ago and the hand of Shafee’ healed so completely that not even a scar can be seen today. (Quraan ke Hayrat Angez Waaqi‘aat pg. 151)