netanyahu in Oman hails a new era of Arab Zionism

Just two days after Apartheid israeli prime minister benjamin netanyahu paid a secret visit to the Gulf Sultanate of Oman to a warm royal welcome, Israeli fighter jets were again pounding the Gaza Strip. Many saw that the Sultanate’s alleged quest for “peace and stability in the Middle East”,[1] if not relevance, could not have been more undermined. But questions remain as to whether its silence towards the crimes of its Zionist ‘enemy’, turned newfound friend is closer to endorsement in an Arabian Gulf that is proclaiming its real allegiances to ‘Israel’ like never before.

On Sunday 28th of October, three Palestinian boys were decimated by a targeted israeli airstrike in South-Eastern Gaza. The Israeli army rushed to claim that the boys were “involved in placing an improvised explosive device” near the security fence.[2] The families of the boys denied that they were linked to any ‘militant’ group, with the mother of 14-year-old Abdul Hameed stating he had “nothing to do with the resistance.”[3]

Despite the israeli narrative initially asserting that they were “terrorists”, they continued to legitimise the killing by claiming they were behaving in a suspicious manner.[4] The three boys whose ages ranged between twelve and fourteen were identified as Khaled Bassam Mahmoud Abu Saeed, Abdul Hameed Mohammed Abdul Aziz Abu Zaher and Mohammed Ibrahim Al Sutari.[5]

The right-wing Islamophobe who described the Muslim call to prayer as the “barking dogs of Muhammad ”,[7] and who wore a picture of the Dome of the Rock during a film festival attended the Judo Grand competition in Abu Dhabi.[8] The minister was also given an honorary tour of the third largest Mosque in the world, the Sheikh Zayed Grand Mosque in Abu Dhabi.

regev later tweeted “we made history. The people of israel live!”[9] The once unthinkable relationship, according to detractors, demonstrates the extent to which the Gulf nations are selling themselves to the Zionist regime and are becoming complicit partners of the occupation of Palestine, stimulated by the post-Trump new-era of Arab Zionism.

After Oman and other Gulf states, it is likely that murderer netanyahu will visit another Gulf nation in the future and one’s imagination does not need to run wild to guess which one.[10] The gradual normalisation of relations between israel and the Arab world cements feelings in Palestine that their plight is being brushed under the carpet and that the reality is that their struggle against injustice will be carried out alone. 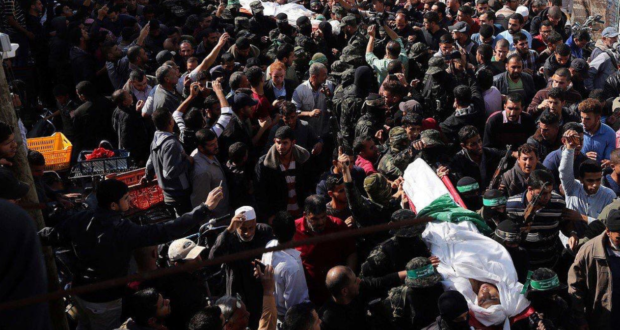 Posted by: Ahmed Hammuda12 hours ago

In another episode of israeli provocation and unilateral escalation against the besieged Gaza strip, Sunday night recorded an embarrassing covert attempt by an israeli ‘Special Force’ to infiltrate Gaza tucked up in civilian vehicles.

In the thick of the night, a dressed vehicle drove three kilometres into Eastern Khan Younis, Gaza, anticipating that a besieged community or resistance accustomed to summary executions, sniper fire and airstrikes would be slumbered.

To its surprise, the vehicle, laden with military supplies reportedly akin to an ‘operations room’[1]was spotted by Gazan soldiers on patrol. A fire fight ensued in which Commander Nour Barakah and colleague Majed al-Qara were killed. According to Gazan sources, the vehicle belonging to the Israeli occupation force had not targeted Barakeh but was preparing for a more major operation inside Gaza.[2] In a rare public address, israeli military chief of Southern Command, maj. gen. tal rousso also denied the failed operation was an attempt to assassinate Barakeh.[3]

Soldiers continued pursuing the fleeing vehicle until reaching the border fence with the occupation despite “all types of Israeli aircraft” interjecting to provide cover. Up to 40 rockets targeted the trailing Gazans and in the fire fight at least one Israeli fighter, a lieutenant colonel was killed and another wounded whilst their vehicle was all but obliterated. According to Gaza’s authorities, even the helicopter frantically trying to provide cover for the Israeli fighters was hit at close range.[4]

The incursion and resulting airstrikes resulted in the killing of seven Palestinians: five of whom were members of Gaza’s military—four from the Qassam Brigades and another from the Al-Nasser Salah al-Deen Brigades, the military wing of the Popular Resistance committee that operates under Gaza’s administration—along with two civilians. According to the Gazan Health Ministry, those that were killed are: Commander Nour Barakah, 37; Mohammed Majed al-Qara, 23; Ala Adin Kwidar, 22; Mustafa Hassan Abu Odeh, 23; Mahmoud Atallah Masabkh, 25; Ala Fasikas, 24; and Omar Jani Abu Khatar. Seven others were also reportedly wounded.[5]

According to a spokesman for the Palestinian resistance, “the resistance taught the (Zionist) enemy a lesson and proved that their intelligence services have become a laughing stock.” Activists added that the fighter killed in the ‘special’ operation identified by Israeli spokespeople as ‘M’ is in fact Mahmoud Khair ad-Din of the Israeli Druze denomination, of the Sayeret Maglan commando unit designed “to operate behind enemy lines.”[6]

Apartheid israeli prime minister netanyahu cut short a visit to Paris to mark the World War One centenary of the Armistice, signed 30 years before Israel’s formal existence. Who and what the Israeli militants’ infiltration was seeking to assassinate or capture remains dubious, but they clearly did not intend to disrupt another of netanyahu’s PR exhibits and endorsements as an accomplice of world peace ahead of his “defence” force’s escalation.

The zionist prime minister told reporters in Paris hours before the operation that he was “doing everything I can to prevent an unnecessary war…first, we aim for calm, then an agreement. We’re not there yet.” In what many saw as another wave of irony, the Zionist government earmarks 100 years since the end of WW1 whilst possibly igniting another addition to its repertoire of onslaughts on the besieged strip.

The Gaza strip has been referred to as the world’s largest “open-air prison camp” by many, including former Prime Minister David Cameron.[7] In recent months the resistance from within its walls has been mounting with more than 230 killed and 24,000 injured in recent “March of Return” protests.[8] The sustained poisoning of its resources is making it increasingly difficult to sustain life, with even its routinely-polluted water source estimated to be “irreversibly-depleted” in 2020,[9]forcing Gazans to pay private enterprises six-times the standard rate for water they can drink.[10]

The operation comes during international efforts to reach a long-term cease-fire in Gaza that is intended to ease the over a decade long blockade on the strip. Some have reasoned that the Zionist occupation is actively scuppering a deal that would potentially see the release of thousands of Palestinian captives in exchange for two Israeli fighters, Oron Shaul and Hadar Goldin, taken prisoner in 2014 following a confrontation which led to a massacre of over 100 civilians in “Gaza’s bloodiest day” in the Israeli onslaught that year.[11]  Years of negotiations and constant pressure by the families of the two fighters, who insist that their political classes can reach a deal with Hamas ‘within a week’ if they wanted to, have been suggested by some as possibly linked to Sunday’s botched operation.[12]

According to Palestinian Activist Ibrahim Hamami, the Israeli operation was not to kill Commander Nour Barakah, but was an attempt to kidnap him. An assassination could have taken place aerially, for which using ground soldiers would have been an unnecessary risk. By cutting his Paris visit short, netanyahu showed that the operation was an utter failure and the use of extremely frantic cover fire shows how hell-bent the occupation is on preventing more of their fighters being caught. The Gazans’ ability to uncover the identity of the attacking force while keeping it at bay with force reveals both its preparedness, and the fact that Gaza’s need for aid and the very basics for life does not mean it has become completely unable to defend itself. [13]

Who is Commander Nour Barakah?

Both Arab and Hebrew media have been vying for information on Nour Barakah, the Qassam Brigades commander in Khan Younis. According to activists, Nour Barakah holds a Masters degree in Comparative Islamic Fiqh and Islamic certification (Ijāzah) in the ten recitations of the Qur’ān.[14] Very few knew about his activities in the Palestinian resistance. In a Facebook post, his sister Iman Barakah wrote:

“Allāh witnesses that you were the more righteous and truthful. Words cannot describe you…you were my love and my friend… even on the day you graduated; you did not allow anyone to take a single picture of you my beloved brother.

I will continue to tell others about you, about your heroism, about your sincerity about your excessive care for us and for me specifically… For your soul may there be peace.”[15]

Share
Previous Shisha: The ‘Muslim Drug’
Next Summary of a Discourse by Shaykh Abdul Mueed (Hafizahullah)

After Ramadan, Try to keep the 6 Fasts of Shawwaal.

Amidst senseless attacks on Palestinians in Jerusalem, Erdoğan argues Israel is a “terror state” Shaheer …