Divine Assistance for the Chaste 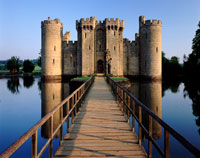 Sayyiduna Ebrahim (‘alaihis salaam) was once travelling with his wife, Sayyidah Saarah (‘alaihas salaam), when they had an encounter with a tyrant king. His habit was that if any woman entered his kingdom and he was inclined towards her, he would abduct her. The news had reached the king that Ebrahim (‘alaihis salaam) was travelling with the most beautiful of women. On hearing this, he summoned Saarah (‘alaihas salaam).

When Saarah (‘alaihas salaam) reached the king, he made evil advances towards her. She immediately made wudhu, performed salaah, and made du‘aa thus, “O Allah,  You are fully aware, I have brought imaan in You and Your Rasool (Ebrahim [‘alaihis salaam]) and I have protected my chastity and reserved it only for my husband, so do not allow this disbeliever to have any power over me.”

2. Despite Saarah (‘alaihas salaam) having outstanding beauty, she preserved it and reserved it for her husband. She did not use this beauty in the disobedience of Allah Ta‘ala and display it to all and sundry. She had protected her chastity to such an extent that at the hour of dire need she was able to present it as a good deed before Allah Ta‘ala in order to draw His divine help.

3. When a person is firm on remaining chaste and pure, then even in the most impossible of situations, Allah Ta‘ala will come to the person’s assistance and create the means of preserving the person’s chastity. The evil and sinful environment of today should not be used as an excuse of falling into immodest behaviour. The important point is that we should keep on trying to preserve our chastity despite all odds.

4. The rewards for restraining one’s desires and carrying out the commands of Allah Ta‘ala are not restricted to the Hereafter. Rather we will enjoy the benefits in this very world as well, just as Saarah (‘alaihas salaam) received a servant in return.

The Fiqh Of Fasting In the Hanafi Madhhab – Detailed

Fasting the month of Ramadan is one of the five pillars of Islam. The Companion …

By Umme Faatimah (B.Dietetics Univ. of Pretoria) eislam.co.za Many of us have developed a …