Police have apologised for making a fake Islamist suicide bomber use a “religious phrase” during a counter-terror exercise in Manchester.

The simulated attack started on Monday night, when a man dressed in black walked into the Trafford Centre and shouted at the crowd.

Moments later an explosion rocked the food hall and hundreds of volunteers, wearing ear defenders and safety glasses, dropped to the floor and ran into shops and cafes screaming. 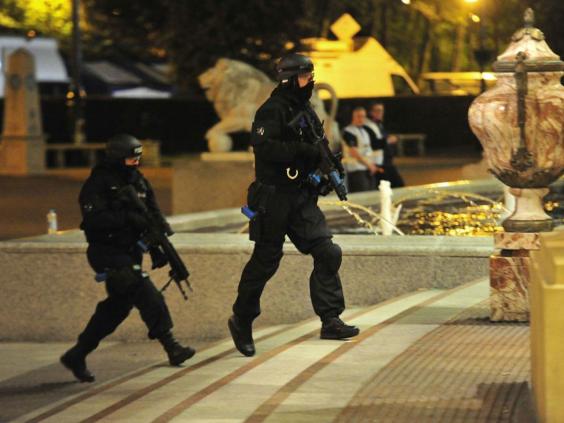 Emergency services take part in a simulated terror attack at the Trafford Centre, Manchester. Police later apologised for the use of an Islamic religious phrase (Getty)

Many wore make-up to simulate serious injuries and others shouted for help in The Orient food court as the sound of gunfire rang out and armed officers moved in.

A man playing the part of a terrorist repeatedly shouted “Allahu Akbar” (“God is great”) before acting out the explosion.

Community groups and activists condemned the use of “stereotypes” for the exercise, with some raising concerns it would fuel anti-Muslim prejudice.

In response to criticism, Greater Manchester Police’s assistant chief constable Gary Shewan said the decision was “unacceptable” and apologised for any offence caused.

“The scenario for this exercise is based on a suicide attack by an extremist Daesh [Isis] style organisation and the scenario writers have centred the circumstances around previous similar attacks of this nature, mirroring details of past events to make the situation as real life as possible for all those involved,” he said in a statement.

“However, on reflection we acknowledge that it was unacceptable to use this religious phrase immediately before the mock suicide bombing, which so vocally linked this exercise with Islam.

“We recognise and apologise for the offence that this has caused.”

Dr Erinma Bell, who was made an MBE for her anti-gun campaign work in Manchester, was among those criticising the decision.

“We need to move away from stereotypes if we want to achieve real learning,” she tweeted. “A terrorist can be anyone.”

Anti-islamophobia group the Community Safety Forum called the use of the phrase “Allahu Akbar” offensive and said it was not necessary to make the scenario real.

Volunteers lay down during the false attack, which was criticised for increasing anti-Muslim hate crime (Getty)

“This sort of thing panders to stereotypes and further divides us,” a spokesperson added. “It will increase anti-Muslim hate crime.”

But many Twitter users were defending the simulation, saying it was justified to imitate the events of the Brussels and Paris attacks.

Police stressed that there was no specific threat to the Trafford Centre, which is the second-largest in the UK.

The exercise, codenamed Exercise Winchester Accord, was planned in December and is part of a national programme, coming after previous drills in London, Glasgow and Essex.

Waking up to the Threat of the Devil – Booklet

China’s Chilling use of Cutting Edge Technology Posted by: News Editor Multinational and well-known brands such …

Medicine and Muslims: The Road Ahead By: Khalid Baig albalagh.net   I graduated from engineering …